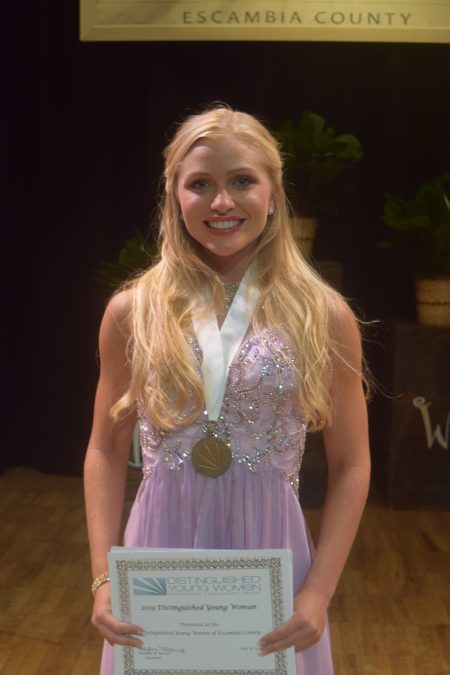 That was a good thing as the Escambia Academy senior was named the county’s new Distinguished Young Woman.

Lancaster said she believes her interview portion put her over the top to win.

“I felt very comfortable with the judges because they were all so nice, and I could really be myself with them,” she said. “When the time was called for the end of the interview I did not want to leave.”

She performed a musical theater piece to “Mamma Mia” for her talent. S

She said that the week before the program, the girls practiced at Coastal Alabama Community College in Brewton every day on stage.

“It was a great week because I made so many friendships with all of the girls participating,” she said. “We practiced hard, but we did find time to have fun and be silly. During the actual competition, everyone was so nice, and we all supported one another. We did this by saying ‘good luck’ before a routine, curling someone’s hair back stage or just reassuring a friend that she did her best on stage.

“I am so glad that I got to meet and become close with so many girls from different schools because I was the only one from Escambia Academy,” she said.

Lancaster is the daughter of Steve and Mary Beth Lancaster of Atmore. She has two sisters, Page Lancaster Gibson and Bailey.

The following are those who won awards at the DYW program:

• Be Your Best Self Essay Contest: Mary Grace Milligan

WSN preps for season with 7-on-7