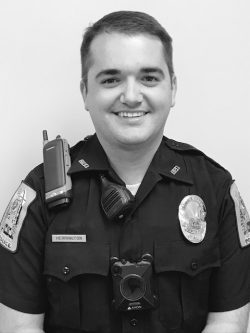 Herrington said he had decided to pursue forestry as a career at one point, but things took a turn toward service, and nearly five  years into his career with Brewton Police Department, he said he loves his job.

“I always wanted to help people, and being an officer is a good way to do that. It is definitely not about the pay–it’s about the people.”

Herrington said police often have to face negativity when officers interact with people often at their worst. “There will be days when there are 49 people who want to curse at you, but then you meet that one who thanks you for helping out and that makes it  all worthwhile.” Herrington said that working in his hometown allows him to see friends every day and meet new people too. Officers are called on to be counselors, mediators, advisors and a myriad of other jobs all rolled into one. And then there’s the excitement  of never knowing what a day will bring. “I don’t like snakes, and I remember there was this one night when someone played a video about an anaconda, did I mention I don’t like snakes? Well, we got a call right then that a group of ladies in the motor inn were terrified because they found a snake in their room,” Herrington said. “Now I was thinking that I wish they had called the fire department instead, but we went to help, caught the black snake and released it safely.” Strangely enough, unlocking cars to assist  motorists are some of his favorite calls, he said, because people are so relieved and grateful. “It’s good to see someone smile when you solve a problem.” Herrington said he enjoys living in Brewton and spending time with his family, helping out in his father’s  flower shop in his spare time. When he is not working, Herrington said he enjoys hunting and fishing and spending time with his wife Kelly. They are members of First Baptist Church.