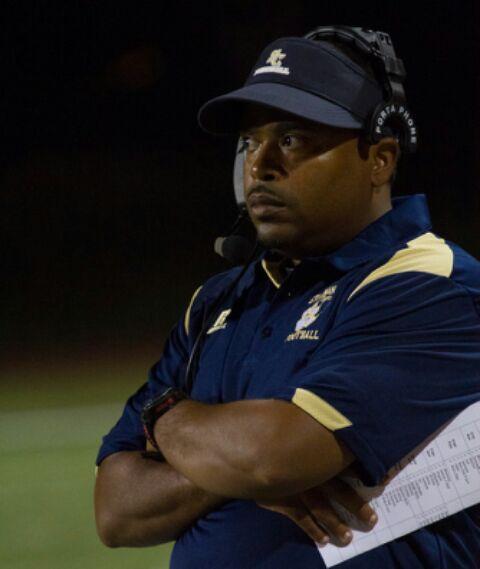 Brewton is a wonderful place to live and start a family, but being a small town, that means opportunities can also be small.

So, in a world such as sports, you have to establish yourself.

You have to know your dream and go after it.

Keaton was known in his days at W.S. Neal as, Teddy Agee.

He later took the last name of his father after graduating Neal.

At Neal, he played football for the Eagles and was coached by Hugh Fountain.

“Hugh Fountain, was a wonder man and coach and someone I respect. I was a fullback for the Neal team. I was probably one of the worst players out of the entire team. We won more games during that time, with Fountain leading us, than any other group of kids. We advanced to the playoffs every year and the only downfall is that we couldn’t find a way to beat Miller,” said Keaton.

“You always wanted to beat Neal. Most of Alabama is familiar with the rivalry between WSN and Miller. No matter what you did that year or how many games you won, if you lost that game you lost your spirit. But one game does not define you,” said Keaton.

After graduating WSN in 1995, Keaton’s path took him to Stillman College to play baseball.

He played baseball there for three years and on his senior year, Stillman developed a football program.

Keaton desperately wanted to be part of the team and to be able to work his way into his dream of coaching.

“Theophilus Danzy was the head coach of the football program at Stillman. I went to his wife, who was one of my teachers, and asked if she could help me talk to Danzy about working with the team. For a week, he avoided me. After classes, I stood at his door for an hour trying to catch him. I finally caught up to Danzy in the cafeteria one day and explained to him that I wanted to help in any way I could with the football team and that I wanted to be a coach when I became older. He made me take his tray, and told me to meet him in the team locker room at 4:30 the next morning. The next morning, I waited as asked. It was almost five hours later before he showed up. He said to me, ‘You must really want to coach football.’ He told me he had nothing for me but an equipment manager position. I did that for a year. I learned everything the coaches done. The next year I was given the opportunity to coach running backs,” Keaton said.

Keaton was looking for another coaching job after he left Stillman in 2004.

He tried at some high schools but it wasn’t his cup of tea.

Later, in 2005, he was given the opportunity to coach arena football for the Odessa Roughnecks.

He served as director of player personnel, defensive line coach, defensive coordinator, and director of college scouting in his time with the Roughnecks.

In 2006, He acquired his first head coaching job with the Lakeland Thunderbolts.

Keaton would finish the 2007 season with a championship with Lakeland.

The program was terminated at the end of the year by ownership.

Keaton continued in arena football as head coach of the Huntington Heroes.

Later in 2008, he made a return to college coaching.

Keaton took on the head coaching position at Webber International, where he would remain for the next three years.

In that three-year span, Keaton turned an ugly duckling of a program into something spectacular.

He moved the team from 80th in standings, to 37th in his first season.

The team received Sun Conference honors and Vincent Anderson, as its first player to reach the NFL.

In December 2010, Keaton was hired as the head coach of Stillman College.

Keaton, being a Stillman alumnus, was extremely happy to be back home where his coaching journey began.

Keaton lead the Tigers to an outstanding record.

He served as coach for Stillman until 2016, when the program was done away with the president of the college.

Keaton currently serves as head coach for Allen University, who are in their very first year of having a football program.

“Brewton is my home. I love the town and everyone in it. My mother is one of my biggest role models. When we lose a game, I try not to call her because of the fear of letting her down. My biggest way I try to contribute to my hometown, is that every year since I have been coaching, I go back to Brewton to find one kid that I can make part of what I’m doing. I have performed this task every year,” Keaton said.

“It started with David Murphy and has continued to this day. Last year, Marvin Maddox was recruited. It’s my way to giving back to my community, the coaches, and the schools. They deserve to have that opportunity. As a coach, it’s my job to help lead these young men in not only football, but life,” Keaton said.