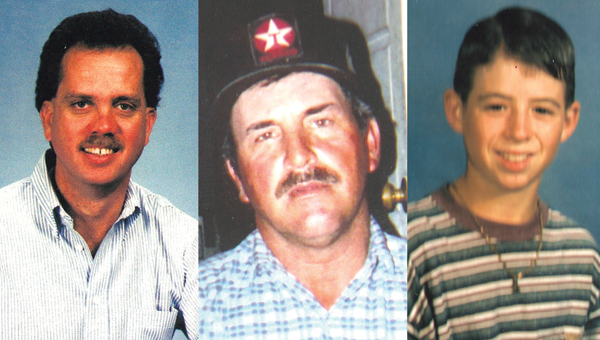 For more than 20 years, three Brewton area families have known those responsible for the deaths of their loved ones were behind bars.

Next month, one of the two men accused in the 1996 murders will have a hearing before the parole board.

Ethan Eugene Dorsey is eligible for parole from an Alabama Department of Corrections facility.

Scott Williams, Richard Cary and 13-year-old Bryan Crane were brutally killed when Dorsey and Calvin Middleton planned a robbery at a country store in the Brooklyn community.
Middleton is serving a life sentence without the possibility of parole for his role in the triple murder.

On Oct. 23, family members for the three murder victims will go before the parole board in Montgomery to plead with the board not to free Dorsey.

“When he made the premeditated choice to rob and murder innocent adults and a child, he lost his human rights as a citizen of the United States,” said Courtney Crane, aunt of one of the slain.

“This parole hearing is important to us because Bryan lost his life; he was an innocent child,” she said. “We lost a member of our family. He was a son, brother, grandson, nephew, classmate and friend to many. It is our duty…to fight against this murderer’s chance of parole.”

Crane said the crime has affected her family in numerous ways – mentally, emotionally and physically.

“Every Nov. 20, the anniversary date of Bryan’s death, is a constant reminder of the night he was brutally murdered for no reason,” she said. “Ethan Eugene Dorsey made the conscious decision to put a gun to the back of a 13-year-old boy’s head, less than three inches away, and pull the trigger.  How someone can make this cold and heartless choice is something my family will never be able to fathom.  My brother, Tim, lost his first born son and his name sake.  My parents lost their first grandchild.  This was the first time in our lives that we had a family member murdered and we didn’t know how to deal with it.  The first few days and weeks were a daze, we kept thinking it was all a bad dream, but it was no dream; this was reality. Bryan was gone.  We all miss him and with each holiday and birthday that passes, we wish that he was here with us but God had a better plan.

The families are asking locals to sign petitions to keep Dorsey in prison.

“In Brewton, petitions are available at the Chamber of Commerce, Peach Ford, Peach Chevrolet, Country Express and Frit Car.  In Evergreen, petitions are available at Tatum’s Furniture. We need original signatures on the petitions, no copies or electronic signatures.  If you feel so led to do so, you can also write a letter on behalf of the Crane family explaining why you do not think this person should be on parole.  If you would like to write a letter, please contact Courtney Crane at cranecs@gmail.com,” she said. “To everyone that has already written letters and signed petitions, we greatly appreciate each and everyone one of you.  Your kindness will not be forgotten.”