It makes no difference if it was last week or 40 years ago, the diagnosis of breast cancer is overwhelming to one who has to face the illness.

In March of 1979 Naomi Scurlock was living the good life. She had no idea she was carrying a tiny bomb around in her body in the form of breast cancer.

“My husband, Charles, found the lump in my breast,” Scurlock said. “I hesitated about seeing a doctor here in Brewton because they were all so young, so I called the West Florida Medical Center and they recommended a doctor for me and in a week I had an appointment with a doctor. Right away he sent me over to the hospital to have a mammogram. I was scared to death and it seemed like it took forever.” 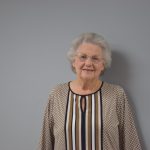 She was supposed to call the next day and give me the results of the mammogram, but when she called, she was sent right back to the doctor’s office. The nurse had gotten the pathologist to rush the results. They first did a needle biopsy, but the news was not good so they scheduled another surgery to do a mastectomy. All this time she had not gotten around to informing her parents of what was going on.

“My folks lived in Panama City, Fla., so I always called them instead of writing,” she said. “I knew that I would begin crying if I called, so I wrote them a letter explaining what was going on. The day I had the surgery my whole family was there. My husband had aged 40 years since my diagnosis and I remember his face as being almost grey. My dad knew a preacher that he heard had done some healing, so he called him. He came down and walked up and down in my room praying for me. After a little bit I felt a healing go from my head to my toes. I knew that my cancer was gone. I even told my doctor that I didn’t want to have any chemo or radiation because I had been healed. But the doctor talked me into it, just in case.”

Scurlock said that she endured a year of treatment even though she knew in her heart she had been cured.

“One thing helped me keep my sanity,” she said. “I was working with Troy Cartwright in the pharmacy and it kept my mind off the cancer. I also have six children that needed looking after.”

She, and her late husband, Charles, raised six children, Jeff, who is a preacher; Gary, who is in construction; Lucretia, who is a nurse in Montgomery; Teresa, who is the lunchroom manager at Excel School; Belinda, a nurse at D.W. McMillan Hospital and Tracy, who is a dental assistant for Dr. Keith Miller.

Scurlock is once again doing very well. She will soon celebrate her 80th birthday and she has been free of cancer since 1979.

“I have been truly blessed,” she said.