A local man is facing multiple charges including strangulation after he fled from a residence on foot after law enforcement officials were called to the scene of a domestic dispute.

Escambia County Sheriff Grover Smith said that the sheriff’s department received a 911 call around 8:16 a.m., Monday, to 6091 Appleton Road in reference to a domestic dispute between a husband and wife.

When a deputy arrived, Timothy Wade McCall fled from the scene on foot into the woods.

Smith said that tracking dogs from Holman Prison were requested and after a lengthy search, the dog warden was able to apprehend McCall. 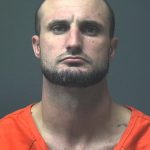 McCall was also out on bond for a previous charge, and the ECSO has requested that District Attorney Steve Billy begin proceedings to revoke McCall’s bond on prior charges.

“Timothy Wade McCall is a danger to his family and himself, and he will not be leaving the facility during the remainder of my (sheriff’s) term and hopefully for a long time thereafter,” Smith said.

Tickets still on sale for ‘Masters of Soul’