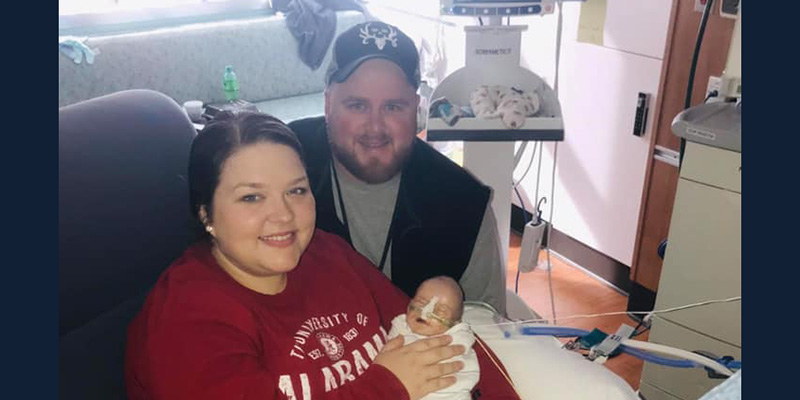 The last two months have been a rollercoaster ride for a local couple and their newborn baby.
Amber Nelson said that she gave birth to Owen seven weeks early due to hypertension issues that led to her being in the hospital on bed rest for two weeks.
Nelson said she gave birth to Owen via emergency C-section.
He was taken to the University of South Alabama Children’s and Women’s Hospital shortly after birth.
“He was shipped to Mobile,” she said.
Nelson joined him several days later in Mobile, when she was finally able to hold her little one.
“He showed no signs of heart defects until four days after birth,” she said.
Nelson said Owen was diagnosed with tetralogy of fallot, which is a rare condition caused by a combination of four heart defects that are present at birth.
According to the Mayo Clinic, “these defects, which affect the structure of the heart, cause oxygen-poor to flow out of the heart and to the rest of the body. Infants and children with tetralogy of fallot usually have blue-tinged skin because their blood doesn’t carry enough oxygen.
“He went to Mobile, with us thinking it would be a normal NICU visit,” she said. “Then, the doctor called us in to tell us he was having Tets spells.”
That’s where Owen turned blue from not getting enough oxygen.
Nelson said they airlifted Owen to UAB and then transferred him to Children’s of Alabama.
“I didn’t get to hold him much until we got to UAB,” she said.
Owen’s journey has made a turnaround in the last two weeks.
While in the hospital, Owen was on a heart and lung bypass machine for eight days, where they gave him a 50/50 chance of survival.
Two weeks ago, doctors told the Nelsons that they should prepare that Owen might not make it.
“At one point, they talked to us about making arrangements,” she said.
They took him off the bypass machine and he breathed on his own.
Then last Thursday, doctors told them they could take him home.
“We came home Friday,” Mrs. Nelson said. “He’s on oxygen and he has O2 monitors. He’s had a stent placed and he went into cardiac arrest twice in his life.”
Despite his challenges in his young life, Owen is growing.
Mrs. Nelson said that Owen weighed 4 pounds, 15 ounces at birth and has gained to 6 pounds, 10 ounces at his Monday check-up with Dr. Paul LoDuca.
“He has a feeding tube, and we are working on the bottle, but he tires easily because of his heart condition,” she said.
Owen will have to undergo open heart surgery when he’s between six and eight months old.
Additionally, Owen has Crainostynostosis, which is a birth defect in which one or more of the fibrous joints between the bones of a baby’s skull close prematurely before the baby’s brain is fully formed.
She said he will have to have head surgery at some point in the future.
“He’s a fighter,” she said. “Everybody has been great with all the support. It’s been good to bring awareness to this, which is some of the lowest funded research.”
Nelson said that the Ronald McDonald House was helpful to she and her husband, Aaron.
“It was a huge blessing,” she said. “We stayed two months.”
The outpouring of love and support has not gone unnoticed.
“It makes you thankful to live in a small town,” she said.