Parker still plans to be active in Brewton despite retirement

Hal Parker has been a familiar face in and around Brewton all his life, serving in both the Brewton Police Department and the Brewton Fire Department.
He announced his retirement a couple of months ago, but that doesn’t mean he won’t still be out there keeping busy in any number of ways.
Parker was born and reared in East Brewton and graduated from W.S. Neal High School in 1975.
He began his public career as a part-time firefighter for Brewton in 1977 and in 1979, he was hired to work full-time.
“In 1991 I went to the firefighter’s academy and was in the first class to graduate from the academy in Montgomery in 1992,” he said. “I stayed at the fire department for a while and worked under three mayors, Ray Sherer, Ted Jennings and Yank Lovelace.”
Parker decided to try his hand at another city job when he switched from the fire department and signed up with the Brewton Police Department.
“Brewton is not like big cities with crime all over the place,” he said. “I never had to deal with anything really bad. I guess the worse thing I remember was a shooting at Colonial Manor. A man shot a cleaning lady and then barricaded himself into the motel.”
In addition to the regular police job, Parker was made the resource officer at T.R. Miller High School, placing a police presence in the high school to deal with any problems that might arise.
He held this position from 2012 to 2016.
“I worked with a lot of people over the years I was in the police department,” he said. “We all had a pretty good relationship and helped each other”
Parker is not married now, but he does have step-children and step-grandchildren that he is close to. He is now doing some driving for Owen Milligan’s Hurri-Clean and he doesn’t rule out other things in his future. He has a beautiful singing voice and used to sing for different occasions, but he said he only does that if someone requests it these days.
Parker has been too busy to think about his retirement too much, and who knows, he might just show up in some new position. He doesn’t rule out some sort of law enforcement in his future, but only time will tell. 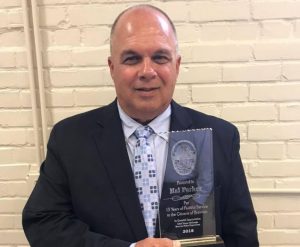