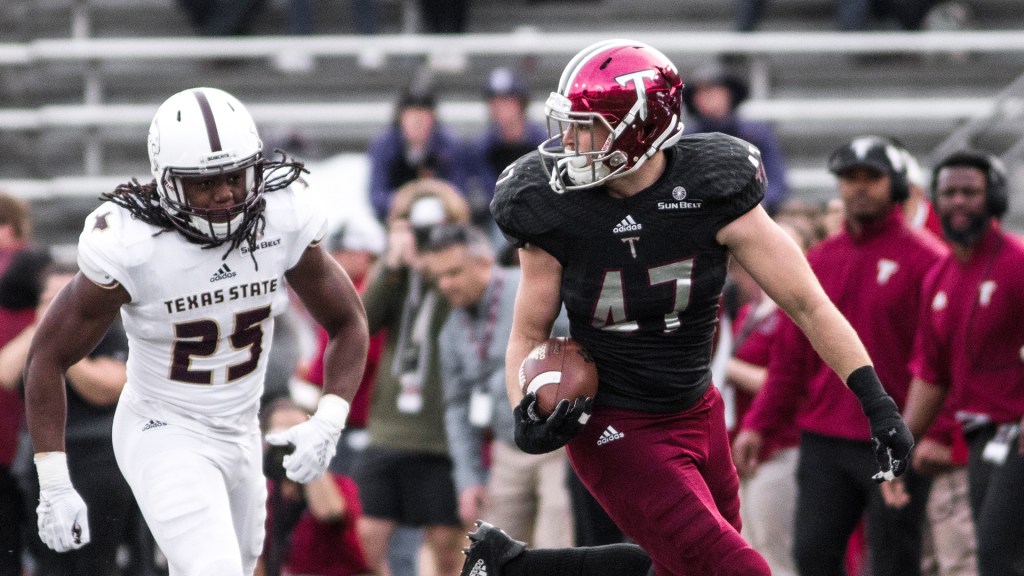 TROY, Ala. – Troy paced the Sun Belt with seven first team and 23 overall selections to the All-Sun Belt Football Team released Thursday morning by the league office. The Trojans, who are 9-3 overall on the season and finished 7-1 in league play, await the destination for their third straight bowl appearance.

Smith, a native of Millbrook, Ala., leads the Sun Belt averaging 91.08 yards per game and with 1,093 rushing yards on the season. He set a Troy school record with five straight 100-yard rushing games earlier in the year and ranks second in the league with 12 touchdown runs.

Willis, a native of Meridian, Miss., ranks second in the league with eight touchdown receptions and with 77.5 yards per game despite not playing in the final two games of the regular season. He leads the Sun Belt with 15 catches of 20-plus yards, 10 catches of 30-plus yards and seven catches of 40-plus yards.

Kelley, a native of Marrero, La., did not allow a sack in 560 snaps and recorded 29 great blocks primarily from his left guard position. He led an offensive line that paved the way for Smith to become Troy’s 10th 1,000-yard rusher in school history. Kelley graded out at 90 percent in three games and paced a Troy offensive line that led the Sun Belt in sacks allowed in league games.

Sanders, a native of Charleston, S.C., ate up blocks in the middle of Troy’s defensive line for a unit that ranked first or second in the Sun Belt in most statistical categories. He enters Troy’s third straight bowl game with seven tackles for loss and a pair of sacks on the season.

Reese, a native Wetumpka, Ala., earned his second straight first team honor after finishing second in the league with 7.5 sacks and third with 14.5 tackles for loss. He has recorded a tackle for loss in 20 straight games entering his final career contest.

Rookard, a native of Spartanburg, S.C., leads the Sun Belt with four interceptions on the season and also returned a punt for a touchdown in Troy’s victory at Nebraska. He has six total passes defended this season in addition to forcing a pair of fumbles.

Jones, a native of Enterprise, Ala., returned his fourth career kickoff for a touchdown and led the Sun Belt averaging 25.58 yards per kickoff return. A Freshman All-American last season, Jones now has four All-Sun Belt awards in his career.

Troy is on the verge of history as a fourth straight bowl victory would secure the Trojans’ third straight 10-win season for the first time in school history and just the eighth time by a Group of Five Conference school since 2002.