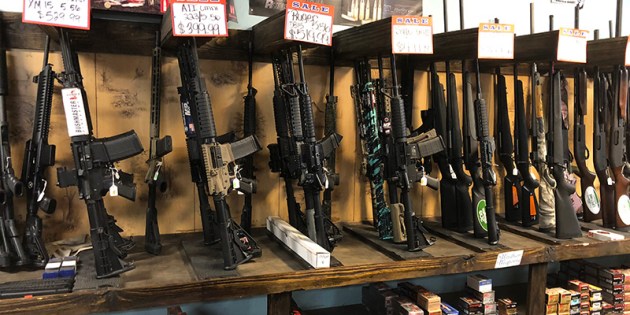 With deer season in full swing, many hunters are flocking to the woods to bag that big trophy buck.
Many new guns, gadgets, scent covers and other accessories are now on the market to aid hunters during their hunt.
With Christmas season upon us within the next week, wives are flocking to local outdoor stores to buy the perfect gifts for their outdoorsmen.
Companies such as Tink’s, Mossberg, Browning, Mossy Oak, Remington, Bass Pro and Cabela’s have set the standard for hunting equipment and firearms.
Each year, new scent covers and various feeders go on the market to help draw in big bucks and not only just on the food plots, but also in the stores.
New camo from Mossy Oak and various other dealers hit the shelves with cutting edge innovations to help keep the hunter concealed, safe and warm.
Local hunting stores such as Bobby’s Guns and Ammo stock their shelves during the course of the year with the best in hunting supplies and firearms.
Firearms are always popular with the hunter.
Firearms should be accurate and light to better aid in helping the hunter cover ground easily and to make sure they bag their game.
“We have great guns and scopes on the shelves right now. Nikon, Leupold and Bushnell are some of the most popular scopes right now and we have great deals on each”, said Bobby’s Guns and Ammo, General Manager, John Gleaton.
New firearms are being developed every year with new technology.
The AR firearms have become a popular standard for the outdoorsman, along with old technologies such as, the Henry rifle.
Bobby’s has great holiday deals running on both and is helping draw in young sportsman by covering hot deals on firearms from Savage, who has become a growing popularity among sportsman over the past several years.
Brands such as Primos and Tink’s are also developing new ways to attract deer with scent sticks.
The scent sticks can be used in a variety of ways and are much like incense sticks.
They are used by lighting one end of the stick and letting the wind carry the smoke over the hunting spot to attract game.
Feeders are also being developed with self-timers.
Self-timers run an accurate feeding time which allows for a constant flow of corn to be spread over the desired location.
These innovations will allow a much easier shopping experience and selection for that special outdoorsman.