Local honored for raising funds for Pilots for Christ 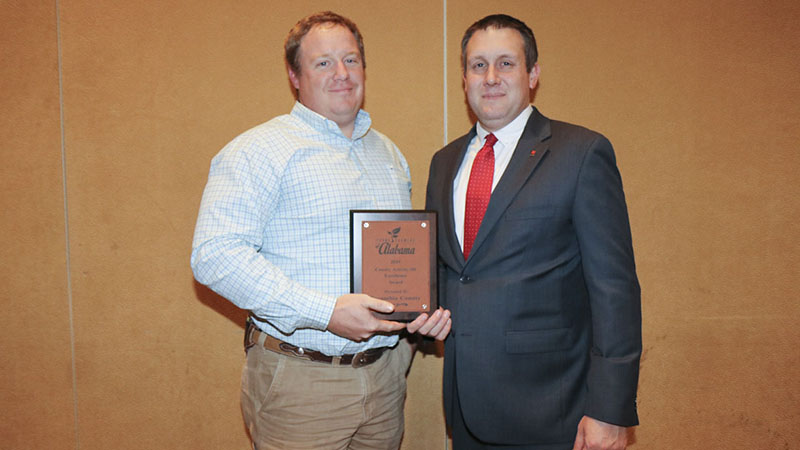 Local resident, Spencer Williamson, recently accepted the County Activity of Excellence Award for the Escambia County Young Farmers for raising $3,500 for Pilots of Christ in 2018.

Williamson was also re-elected to a second two-year term on the State Young Farmers Committee during the Alabama Farmers Federation’s 97th annual meeting in Montgomery last month. He will represent District 8, which consists of Baldwin, Butler, Clarke, Conecuh, Escambia, Mobile, Monroe and Washington counties. As a member of the 10-person committee, he will help organize the 2019 Young Farmers Conference and work to build the membership of the group in his district.

“Our group here in Escambia County has a small membership while larger counties such as Montgomery have always gotten most of the recognition,” Williamson said. “It wasn’t fair to the smaller counties and now we will get recognition for the things we do. It was a surprise to get an award for the ‘Wild Hog Roundup at the meeting in Montgomery and I was re-elected to serve another two years as chairman of this district at the state level.”

Young Farmers is a part of the Alabama Farm Federation for members who are 18 to 35 years old. They are active farmers working for themselves and others. Williamson is raising 50 show cows and he manages and oversees the mama cows for his father-in-law, Bill Herrington. He consults and assists with five other beef cattle operations. He and his wife, Kate, own a mineral and feed business (J&K Cattle Services named after their children).

Williamson was born in Brewton and moved to Auburn while his dad was in vet school. When he was five years old his family moved back to this area where his dad went to work at the Neal Farm on Ridge Road. He attended the county schools in East Brewton and graduated from W. S. Neal High School in 2006.

“I thought I was through with farming,” he said. “My brother, Logan, and I had been working on the farm all our lives and I didn’t want anything else to do with it. I went to Ozark, went through a 16 week fire school and came back to work with the East Brewton Fire Department.

“I accepted a job at the Poarch Fire Department in 2009 when they opened the new facility there,” he added. “I started to realize I missed the farm and wanted to get back to it. My parents, Todd and Linda Williamson, my brother, Logan, and I all live out there. My heroes have always been my parents and, now that I am grown, I appreciate them even more. I used to follow my dad everywhere he went when I was little and now I am able to do the same with my son.”

Williamson said that his schedule at the Poarch Fire Department allows him the time he needs to get all of his other work done. He works 24 hours on and 48 hours off and has time for his other businesses.

“I saw how much an education helped my dad, but I didn’t go to college,” he said. “All the time I spent with him was a learning experience where I made a lot of contacts with others in the business. I also worked at the extension service through the Young Farmers where I made friends with people from all the other counties in the state.

“Farming is not as popular as it used to be,” he added. “There are less of us and more people who need to eat. We are lucky in Escambia County, as we are a very diverse county. We have timber, but we also have farms and crops.”

Williamson married Kate Herrington, daughter of Bill and Kay Herrington, in 2009. They have two children, James (4) and Loggins (2).

“Kate handles all the books for the business,” he said. “If she wasn’t working with it, nothing would work. I really appreciate the people around me. I lost my Paw Paw last year and I really miss him. I think I have been truly blessed to have my family around me.”