Inmates captured; one found walking on Interstate in underwear 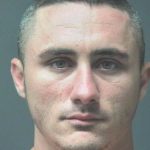 Two Escambia County, Ala., inmates who escaped from the work release barracks were captured on Sunday with one being found on I-65 in just his boxer briefs.
Escambia County Sheriff Heath Jackson said that on Friday, Christopher Moye and Christopher Pugh escaped after they discovered a design flaw in the building.
“Using numerous K9 tracking teams, a perimeter was established, and a search was conducted for approximately six hours before losing the track,” Jackson said.
Then, on Saturday, deputies responded to Whites Lane in the Wawbeek Community for an attempted burglary.
The description of the suspect matched the description of Moye and a K9 unit was requested for another search, Jackson said.
“Nearly seven hours later, the K9 tracking team took Moye into custody and he was transported to the Escambia County Detention Center,” he said.
Jackson said on Sunday, law enforcement officers responded to a suspicious person walking down Interstate 65 wearing only box shorts.
When approached, Pugh was identified and then told the officer, “please take me back to jail,” Jackson said.
Pugh was transported to the ECDC pending further charges.
“I would like to thank the Alabama Department of Corrections K9 tracking team, Camp 5 Road Prison K9 Team in Escambia, Fla., Century CI Tracking Team, Brewton Police Department, Atmore Police Department, Flomaton Police Department, U.S. Marshal’s Gulf Coast Regional Fugitive Task Force, Escambia County (Fla.) Sheriff’s Office, and our deputies for all their hard work in getting the two individuals back in custody,” Jackson said. “We couldn’t have done it without their teamwork, and I would like to say, ‘job well done.’”