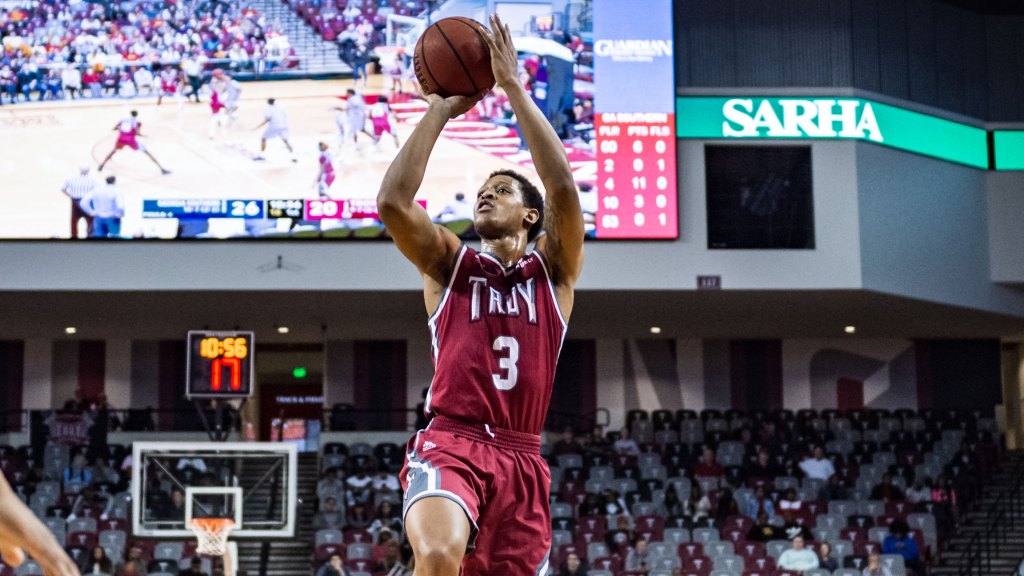 Mobile, Ala. – Troy could not slow down South Alabama in the second half and dropped a heartbreaking 81-75 loss in Sun Belt Conference men’s basketball action inside of Mitchell Center on Saturday night.

Four Trojans notched double figures led by sophomore DarianAdams with a career- and game-high 17 points on an effective 3-of-4 shooting from three. Adams added five rebounds and four assists to his stat line.

The Trojans missed their first six field goal attempts to start the second half which allowed the Jaguars to go on a 12-2 run and trail by two with 14:53 remaining. USA eventually tied the game at 66 with 4:49 left before taking a 71-70 lead 1:28 later that it would not let up.

QUOTING COACH CUNNINGHAM
“It’s an extremely tough loss. The difference in the game was South’s three-points shooting in the second half and we also had some turnovers down the stretch that hurt us. They also outscored us by 10 at the free throw line which is a major difference.”

“We played well enough to win, our offensive stats, I don’t know if there’s ever been a game where you shoot that well and still lose. It’s a tough loss and the only thing we can do is regroup next week and try to get back in a groove.”

UP NEXT
Troy will be back in Trojan Arena as it faces Little Rock on Thursday at 6 p.m. and Arkansas State on Saturday at 2 p.m. Both games will be broadcast live on ESPN+.