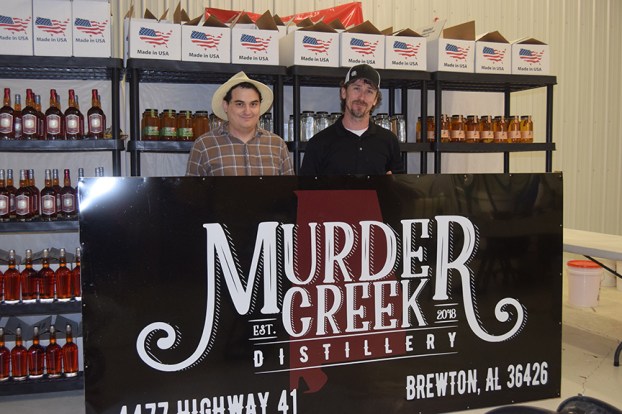 What started as a dare between two friends has evolved to a new business in the Riverview community – Murder Creek Distillery.

Micha McCall, one of four owners, said that he dared Stephen Matthews to make a little alcohol with his distillery equipment.

“Fifteen months later, here we are,” he said.

Matthews said he had distilling equipment initially to make essential oils and then to make turpentine, but McCall’s dare made him change his thinking.

He redesigned his still and added another portion to ensure that they could get the proof high enough.

Matthews said they just experimented with the product until they got it right.

Currently they have four products approved and are looking to get two more.

Flavors are Alabama Apple Pie moonshine, Murder Creek Moonshine, Peach Cobble Moonshine and Dixie Honey liqueur, which is honey and sweet tea based and has some light cinnamon flavoring.

Matthews, who is from Navarre, said they can turn out more volume in Alabama, and the McCalls had a stand-alone building in Riverview.

It took a year for the pair, and their fathers – Freddie McCall and Dan Matthews – to get the licenses.

“We are allowed to sell three bottles per day, per person,” Matthews said.

The moonshine retails for $20 per bottle at the store and the Dixie Honey for $30 per bottle.

A ribbon cutting will be held today and the store’s grand opening celebration will be Saturday from 10 a.m. until 6 p.m.

Regular business hours will be Tuesday through Saturday from 10 a.m. until 6 p.m.