She is a teacher. She is a mother. She is the first and only African American Councilwoman in Brewton. She is Cheryl Barton.

She has seen the world around her crumble from hate in the shape of the KKK’s cross burning in her front yard to the fall of Jim Crow laws.

She has seen the world around her grow from the creation of her own family to the boys and girls of Neal Elementary becoming the leaders of Brewton today.

“I always say that I have taught everyone here in Brewton,” Barton said. “I’m known for being an educator and now as a city official. Because of my husband, who was born in Escambia County, I was first known as Fred Barton’s wife. Now, I think I made a name for my own self.”

Barton grew up on the outskirts of Evergreen during a time she calls “the wagon and mule era.” She is the fourth child out of 11.

She started working full-time when she was in only the ninth grade as a short order cook. She cooked every day after school except on Wednesdays and every other Sunday. After graduating from high school, she attended Jefferson Davis Junior College.

After graduating with a degree in home economics and a minor in early childhood education, she married her husband and moved to Brewton in 1973. She had two daughters of her own and adopted all three of her granddaughters.

Barton’s greatest joy in her 47 years in Brewton is children. She has chaperoned at T. R. Miller High School as a band mom and now a basketball mom for the past 40 years.

She is especially proud of being the first African-American Councilwoman in Brewton.

“I know that if my husband were living, he would be very proud of me,” Barton said. “It makes me emotional because when I grew up, I was kind of labored. They told me that I would never amount to nothing, and that’s when I started working early in my life.”

Barton said if she could give a piece of advice to her younger self who was petrified by the KKK, she would say: 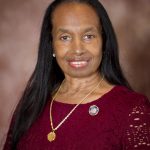