Chapman still has plenty to do 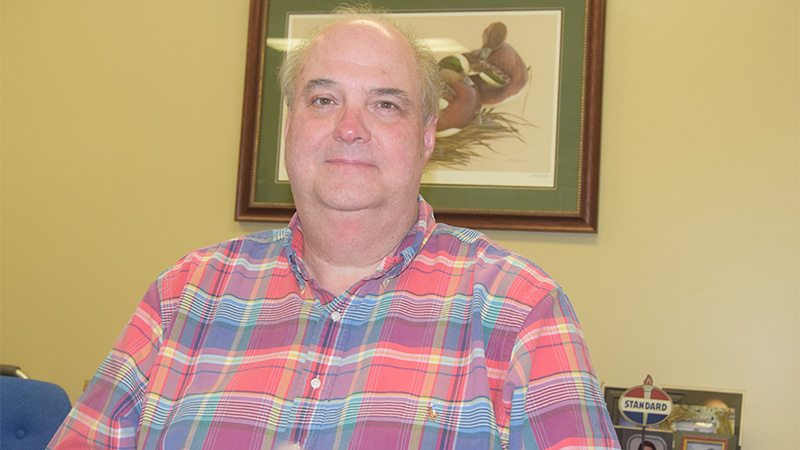 If you are one of those who heard that Roger Chapman was retiring, think again. Yes, he has decided to step down from one of his volunteering jobs, but he has plenty left to do. He is still working at his “paying” job and volunteer work is something that never goes away. There is always a need for those who will jump in and do what needs to be done. Chapman is one of those.
“I work for the McMillan family at Goodway Refining, LLC, which is a crude oil refinery,” Chapman said. “I came here from Jackson, Miss. after I was approached by Tom McMillan to make the move. I love my work and I believe that if you love your job, you’ll never have to work a day of your life. If you don’t enjoy what you are doing, then you should do something else.”
Although he seems to have lived his whole life in Brewton, he was actually born and raised in Hartselle, Ala. He graduated from Morgan County High School in 1974 and after graduation, he entered the University of Alabama. He had played football in high school and although he did not receive an athletic scholarship to go to college, he worked hard and made a place for himself as a kicker on Bear Bryant’s team. In fact he played on the 1978 National Championship team.
“I planned on becoming a dentist, but changed my mind and graduated with a bachelor’s degree in geology and I minored in English,” said Chapman. “To be able to communicate well, you need some language skills.”
After he graduated from the University of Alabama in 1979, He went into the oil business in Jackson, Miss. and in 1983, he had a visit from Tom McMillan who hired him to come to work at Smackco Operating, Ltd., an oil and gas exploration company owned by the McMillan family.
“The McMillan family has been good to me,” Chapman said. “We don’t do a lot of exploration anymore. These days we are into refining crude oil and selling more products such as blendstock, gasoline, kerosene, mineral spirits and fuel oil.”
Chapman is the general manager of Goodway Refining, LLC and is in charge of marketing for the company and is not thinking of retirement just yet. He, and his wife, Amy, who were married in 1982, have two children, Tyler (32) and Caroline (26). Amy was a school teacher, but she is no longer active in her profession.
Chapman has recently retired from his position of president of the Brewton Parks and Recreation board. He loves the outdoors working with all kinds of environmental fundraisers over the years. He has been a member of Ducks Unlimited, Waterfowl USA, National Wild Turkey Federation and the Alabama Wildlife Federation.
In his position as head of the Brewton Parks and Recreation board, he has seen many changes and improvements in the sports parks around town.
“The people who work with the various city board are a dedicated group of people,” he said.
Chapman is a past president of the Rotary Club, and has worked with the Brewton Chamber of Commerce, the American Heart Association, and several other civic organizations.
The Parks and Recreation board oversees areas such as the ball parks around town and supports the various teams in the summer sports program of the city.
“I used to hunt a lot of weekends but now we have a house in north Alabama at Smith Lake and we spend a good many weekends there,” he said. “I’m learning to slow down a little bit, and that’s not too bad at all.”

After 36 years, she’s the boss