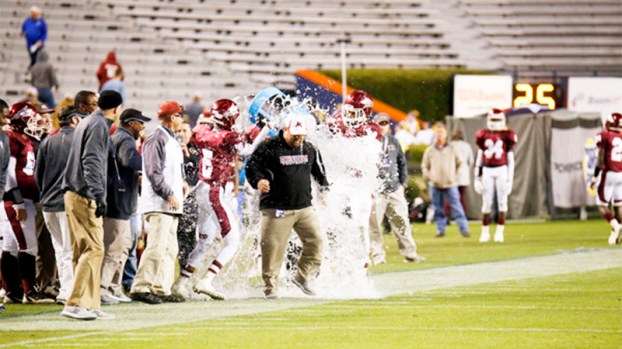 Brewton City Schools named Brent Hubbert new head coach and athletic director Tuesday afternoon in a 3-2 vote.
Regina Watson and Sybil Brundidge voted against the hire.
Hubbert, replaces Keith Etheredge, whose resignation was also accepted at the board meeting. He left after one season to coach at Oxford High School.
Hubbert has served as athletic director and head coach at Maplesville High School, where he amassed a 166-26 record.
Prior to being at Maplesville, he was head coach at Jemison from 2000-2003 and has also coached at Smiths Station Intermediate School and Wacoochee Junior High School.
Overall, his coaching record is 183-41.
His teams have won 10 region championships; earned the 2013 Class 1A football runner-up; and a three-peat in 1A football championship in 2014, 2015, 2016.
He has led his football teams to the state playoffs for 15 straight seasons.
He was named the offensive coordinator in the 2007 North/South AHSAA all-star game; served as head coach in the same game in 2011; and was named the 1A coach of year by the Alabama Football Coaches Association and served as assistant coach for the Alabama-Mississippi All-Star Game in 2015 and 2017.
He is a 1989 graduate of Lanett High School and earned a bachelor’s in education from Jacksonville State University in 1994.
T.R. Miller Principal Chuck Alford said he was excited to have Hubbert at the helm of the program.
“We will do anything we can to help continue the tradition of excellence that was built long before I came here,” he said.
Board member Bart Till, who is at TRM alum, encouraged the crowd gathered at the board meeting to know that the decision wasn’t taken lightly.
“It’s great that we live in a community where this many people turn out about a football coach,” he said.
He commended the community for its passion.
“It has not been easy the last couple of weeks,” he said. “We have had calls, texts and Facebook messages. We have not taken this lightly. I love that high school. It gave me a start in life.”
Till said there was a great group of candidates, but that coach Hubbert stood out above the rest.
“Everyone isn’t going to be happy,” he said. “But let’s come together and support coach Hubbert. It’s all about the kids.”
Board member Regina Watson, who voted against the hire, echoed that the children are important to the community.
Hubbert said in a phone interview Tuesday after the board meeting, he is excited about coming to TRM.
“I have grown up in the state of Alabama as a coach’s son,” he said. “I know the top programs and TRM has been at the top. When you get a chance to leave one great program and go to another, that’s something to be able to be the head coach at two of the best programs in the state. I’m going to bust my tail, and we are going to get back to winning and bring home some blue maps.”
Hubbert plans to be at spring training today.
He is married to Kelly and they have two sons, Brody and Eli.