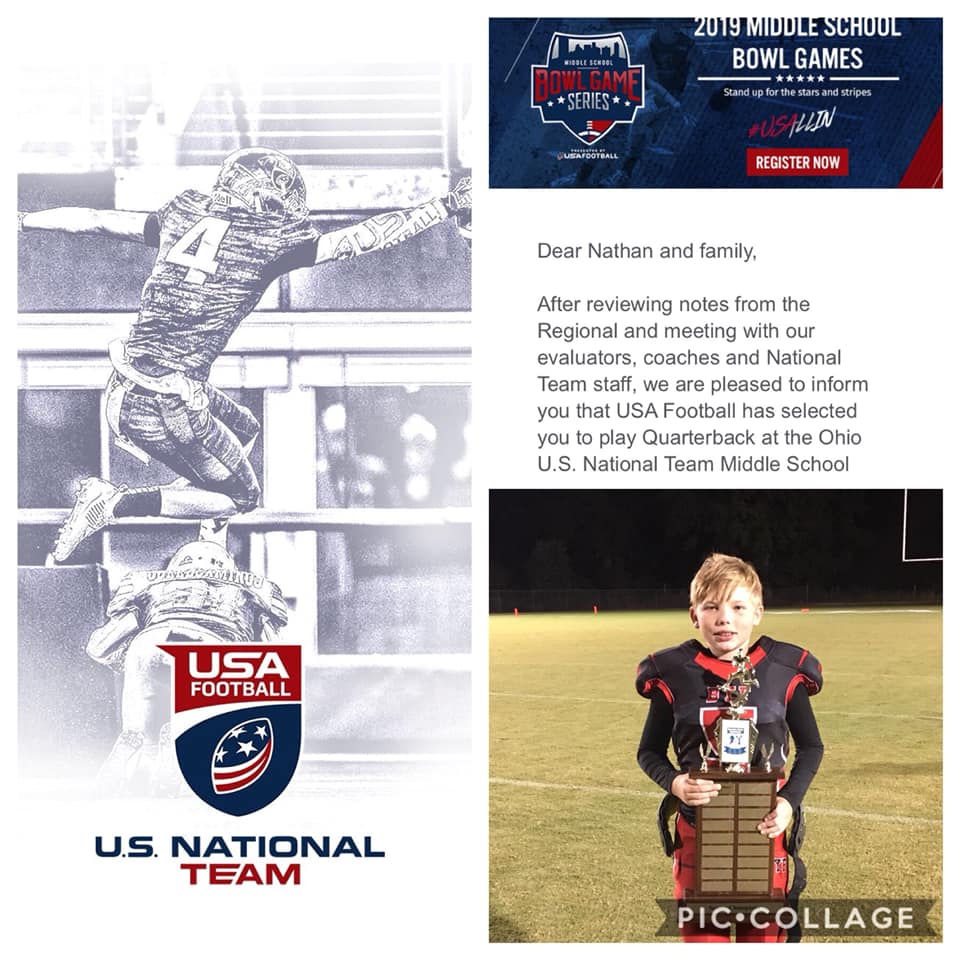 Nathan Commander, a sixth grader at Brewton Middle School, was selected as one of only six sixth graders from around the country to play quarterback and represent The United States of America on the USA National Team at the USA Football Middle School Bowl Games in Dallas. Following in the footsteps of NFL greats like Todd Gurley, The Honey Badger Jamies Winston and Dewayne Haskins. Nathan received an invite to attend a regional tryout in Atlanta one of 20 held in major cities around the U.S. During the two-day tryout where he competed against 36 other middle school aged quarterbacks and over 350 kids total. The two-day try out was very intense and he had to raise his game up big time. After the first day of individual drill work he was moved up to play with the eighth graders in 7-on-7 and 11-on-11 non-contact competitions. He finished the day ranked in the top 3 of all quarterbacks in attendance from sixth grade through 11th grade and about a week later received and email stating that he had been selected to play quarterback for the US Nation Football Team.
Nathan plays quarterback for the Brewton Youth Football Senior Tigers and just came off of an undefeated championship season in The Escambia River Conference Football league. He trains year round to better himself at the quarterback position. On weekends he travels to Mobile to train with David Morris founder of QB Country and personal coach to Jake Fromm, Daniel Jones, Eli Manning and one of Nathan’s favorite QB’s AJ McCarron. During the summer you can find him at Municipal Stadium around 8 a.m. working with former T.R. Miller Tiger and current Shorter University QB Caleb Winton. In June, Nathan will travel to Tuscaloosa and compete for his fourth-straight All Saban Award at the 2019 Nick Saban Football Camp. Nathan has a passion to play football and loves to compete.
The Middle School Bowl Games will consist of two sixth grade teams, two seventh grade teams, and two eighth grade teams comprised of kids from more than 35 states. Nathan and his family will travel to Dallas from July 10 through July 16 with the game being played Monday, July 15 at the Star Home of The Dallas Cowboys. During the weeklong event Nathan will participate in four full days of practice with some of the top middle school athletes from around the country. The coaching staff consists of more than 20 college and top high school coaches from all over the United States. After four days of practice the game will be a full padded contact event aired on ESPN 3, The Watch Espn App and USA Footballs YouTube channel.