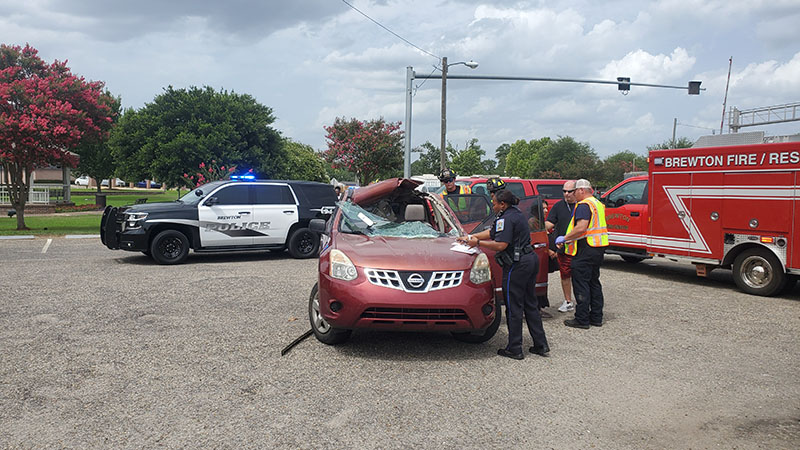 A 2011 Nissan Rogue SUV crashed into a log truck on St. Joseph Avenue next to the City Park and Escambia County Courthouse on Tuesday. The driver and passenger sustained minor injuries from the windshield glass. The Brewton City Police’s Public Information Officer Heath Madison said that the driver and passenger were both transported by an ambulance to the D.W. McMillan Memorial Hospital for treatment, but neither of them stayed overnight.

The car’s front windshield and roof were severely damaged. The logs almost pulled the roof of the car completely off. Brewton City Police Officer Steven Ferguson said the driver crashed into a load of logs that was slightly hanging off of the log truck. Ferguson confirmed the SUV did not roll.

Madison explained that the log truck was in the middle of taking a left turn off of St. Joseph Avenue onto Deer Street when the SUV on the south bound lane crashed into the overhanging logs.

“The driver could have avoided this accident,” Madison said. “They could have moved to the other lane or slowed down and waited for the truck to complete the turn. The log truck wasn’t the issue because it adheres to the DOT laws. It had colored flags on the end of the logs and flashing lights.”

Madison confirmed that the driver of the SUV wasn’t under the influence, and to their knowledge, no distractions such as texting caused the accident.

Madison suggests that whenever you drive behind a log truck, keep two car lengths between your vehicle and the truck and to stay vigilant by keeping an eye on the logs and the flags attached to the overhanging logs.