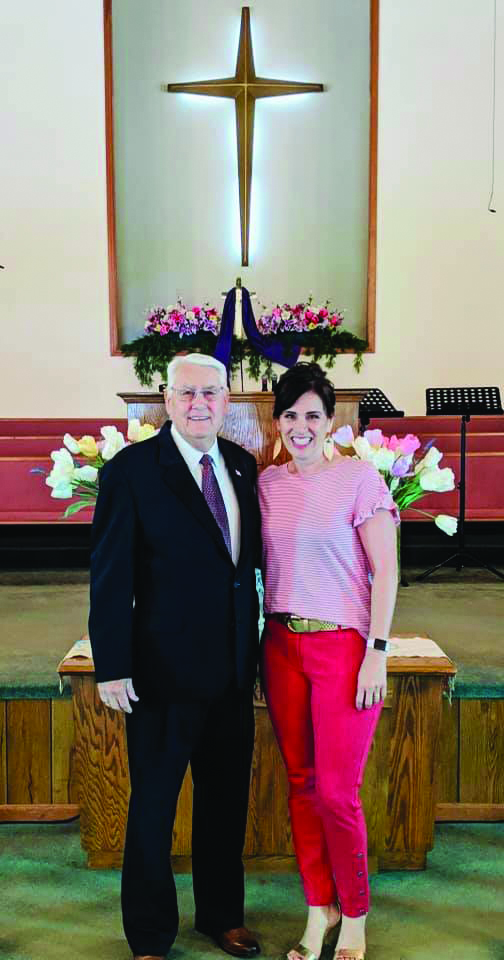 Above, Dr. Meadows is pictured with his daughter Sandi Carlson inside the First Church of the Nazrene in East Brewton.

Brother James Meadows, pastor of First Church of the Nazarene in East Brewton has announced that he is retiring after many years of service in the ministry.

Members of the church will certainly miss him and his family, as he will miss them. “After 22 years it will seem strange not to preach there any more,” said Meadows. “I retired last week, but they had no one to preach so I filled in on Sunday.”

Serving in the ministry for so long, it may be hard for him to give it up; however, he has plans. “We are expecting our first great grandchild and we plan on spending a lot of time visiting and playing with her,” Meadows said. “Her name is Charlotte and we plan to spoil her rotten.”

Meadows was born and raised in Pensacola, Fla. and planned on serving in the ministry since he was a small boy.”I was saved when I was nine years old,” Meadows said. “I was called to serve God in a Baptist church in Pensacola, but I think I ran from God for a while. In the end you can’t run from God.”

He joined the U.S. Army in 1963. While he was in the military, he finished high school. He served from 1963 to 1965, becoming a Vietnam Veteran. During his last year in the military, he married his first wife, Lanita. Together, they had three daughters, Carla McGhee, Sandi Carlson and Nancee Dehoff.

He worked at a couple of jobs and ended up at St. Regis where he worked for seven years. But God was still chasing him, and finally the time had come to answer the call. One day he came home and announced that the family was moving to Colorado where he was going to enter the Nazarene Bible College in Colorado Springs, Colorado. He had no job, no place to live, and not much money but it didn’t matter. He was answering the call from God that he had heard all those years ago.

His daughter, Sandi Carlson, writes a blog entitled Deeper Waters, and she told the story of the family’s move to Colorado. “My mother told us the story of their move,” said Carlson. “We drove straight through from Florida to Colorado because we had no money for a hotel. We found a basement level apartment and Dad found a part time job at a grocery store. He cleaned the store at night and attended school during the day, stated Carlson. The apartment was so small we had to be real quiet when Daddy was sleeping,” she added. “There was no washer or dryer so Mom washed clothes in the bathtub and hung them all over the apartment to get them dry.”

Following school, his first church was in Louisiana, then in Arkansas, followed by a stint in Pace, Fla. From there they moved to Archer, Fla. which was close to Gainesville. He became interested in the Florida Gators and soon was a big fan, he even went so far as to wear his Gator tie to church.

His next move was to East Brewton in 1997. It was here that he lost his wife after 48 years of being happily married, but God was good to him and brought to him his current wife, Lillian Heller.

“I knew her for twenty years while she was married to her first husband and I to Lanita. And now we are looking forward to retirement,” he said. They have eight grandchildren and Charlotte on the way. They plan to spend time with each of them. “I have been blessed,” Meadows said. “These years in East Brewton have been the highlight of my ministry and I love my church and the people in it.”