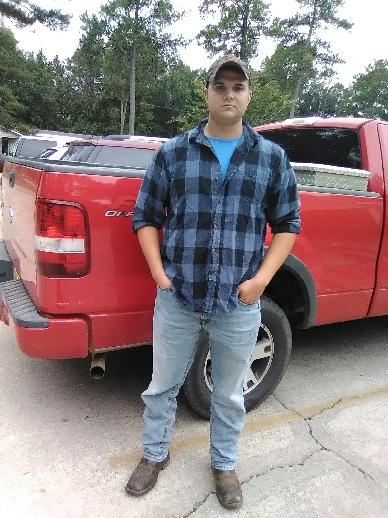 Alex O’Keane may not be the youngest firefighter at the Brewton Fire Department, but he is one of the youngest. He has recently completed the course of Firefighter II. He is one of the 16 full time firefighters working at the station on St. Nicholas Avenue. There are 13 shift workers and three who work strictly days with four on duty at any one time.

Like most firefighters in small towns, most of them also have a second job and O’Keane is no exception. When he isn’t at the fire station, he is working maintenance at Alabama Coastal Community College.

“I really like the people I am working with,” O’Keane said. “Everyone is part of a tight knit group. I never thought I would become a firefighter. My stepfather was in the military and I thought that was what I would do.”

O’Keane was born in St. Louis, Mo. and moved around some before his step-father left the military and moved the family to Escambia County. He grew up in the Damascus community and attended W.S. Neal High School, graduating in 2015.

During his junior and senior years in high school, he attended the Career Technical College and found that he liked firefighter work.

“I wanted to be in some type of service work and becoming a fireman seemed like something I would like,” he said. “I went to school in Tuscaloosa for nine weeks and then got hired in May of 2016 at the Brewton Fire Department.

“These are some good people that I work with and the job fits what I am,” he added. “Our family has always been oriented toward service work and this is my way of helping people.”

He and Jasmine Carter were married on Dec. 17, 2016 and they are now the parents of two children, a daughter and a son.

“You don’t get rich as a firefighter, but I love what I am doing,” he said. “There are some good guys here and I like working with them. I like that we work to help people to keep them safe.

“We are involved with the church, and it is very important to us,” he added. “We attend Ridge Road Baptist Church and I admire our pastor very much.”

Life is Ruff Without a Groomer pet salon offers…