On Oct. 22, the Escambia County Historical Society held its general meeting at the McMillan Museum. The special guest was Dr. John R. Bratten.

Dr. Bratten is the chair and associate professor of anthropology at the University of West Florida, where he teaches archaeology, maritime studies, shipwreck archaeology and artifact conservation.

The Spaniard de Luna and about 1,500 soldiers, colonists, slaves and Aztec Indians traveled in 11 ships from Veracruz, Mexico to Pensacola. A hurricane struck Pensacola about a month later, sinking six ships into the bay and wiping out a significant portion of their supplies.

The remains of three of the six ships that sank in the bay have been found and are being investigated by teams from the University of West Florida.

The following article about the De Luna colony and the loss of the ships associated with it, is taken from the University of West Florda site <http://www.flpublicarchaeology.org/anthro/ep2/fleet/>.

On the night of September 19, 1559, Pensacola Bay was struck by a violent hurricane which raged insanely for the next 24 hours. What made this hurricane different from all previous storms in this area was the presence of a fleet of 10 Spanish sailing vessels an-chored alongside the recently established colonial settlement of Don Tristan de Luna y Arellano, consisting of some 500 soldiers and 1,000 civilian colonists, including a diversity of Spaniards, Africans, and Mexican Indians, as well as a handful of Dominican missionaries.

The fleet consisted of a wide range of vessels, both small and large, old and new, some privately owned and some royally owned. During the course of the storm, most of the largest ships broke loose from their anchors and floated free, ultimately grounding or sinking with considerable loss of life. The contents of the vessels, many of which apparently broke apart, were inundated and scattered in the storm waters. One vessel was pushed inland by the storm surge and deposited intact in a dense grove of trees. Surviving colonists and sailors scavenged the shores for days, but the loss of the fleet ultimately proved to be a fatal blow for the Luna expedition, because in those ships was the one item most pivotal to the success of the colony: food.

Luna’s 1559 colonial venture was a carefully-planned expedition, financed by the Spanish crown, organized in New Spain (present-day Mexico), and intended to become the first successful Spanish colony in what is now the present day Southeastern United States. It would have been a launching-point for overland expeditions to the Atlantic coast of modern-day South Carolina, and would have established a firm foothold for Spain in North America.

In 1558, a small fleet of reconnaissance craft had been specially constructed in Veracruz in order to scout potential settlement locations along the northern Gulf of Mexico, and when the colonial fleet comprised of 11 ships finally sailed on June 11, 1559, the 1,500

colonists were supplied not just with the equipment, supplies, and armament they would need to establish a new settlement on Pensacola Bay, but also with more than a year’s worth of food packed into the many large merchant vessels that formed part of the fleet.

Where previous expeditions such as that of Hernando de Soto had failed in part due to their reliance on local food stores either bartered or taken from neighboring Native American communities, the Luna expedition was specifically designed to avoid such potential ten-sions by providing more than enough food for all the colonists to be able to sustain themselves until a colonial town was built, and crops were planted and harvested. This had been the most important advice provided by four Southeastern Indian women, originally captured during the Soto expedition, who were brought along on the expedition as advisors and interpreters.

So important were these food stores that when the fleet entered Pensacola Bay on August 15, most of the food was left on board the ships until a secure ware-house could be constructed on land. Based on Luna’s initial reports, the Viceroy of New Spain believed Pensacola Bay to be completely safe for Spanish ships, claiming extravagantly that the port is so secure that no wind can do them any damage.

Though one fortunate galleon was sent back to Mexico on August 25 with news of the expedition’s successful landfall, the rest of the ships were unloaded gradually over the course of the first month, focusing first on soldiers and colonists, along with their equipment, supplies, and weapons. During this time, two exploratory expeditions were sent inland to recon-noiter the countryside while two vessels were outfitted for a voyage directly to Spain, awaiting only the return of the reconnaissance parties. When the winds began to blow during the night of September 19, however, the Spaniards were caught completely by surprise.

After the storm, only 3 ships were still afloat, including two small barks and the expedition’s only caravel. Though Luna’s colonists scavenged whatever they could from the remnants of the fleet, the damage was done, and news of the calamity was sent to Mexico on one of the remaining barks, which was dispatched on September 29. When news finally arrived in Veracruz on October 5, the Luna expedition was instantly trans-formed from a bold colonial venture into a rescue operation, and all subsequent ship traffic between Veracruz and Pensacola focused on sending food and other supplies to the hapless colonists.

The colonists ultimately became so hungry that they moved inland to the nearest large Indian town along the Alabama River, and were ultimately forced to send a detachment of soldiers hundreds of miles upriver to the edge of the Appalachian summit in northwest Georgia, trading whatever they owned in exchange for corn and other food supplies.

When the remnants of the expedition were finally withdrawn in 1561, Luna’s colony joined the ranks of all previous failures by Spanish adventurers in the Southeastern United States. Over the course of the next decades and centuries, the wrecks of Luna’s seven ships dissolved quietly into the sand and mud of Pensacola Bay, hidden from the modern world. But within these ships remained a moment in time, captured and preserved as a result of the hurricane of September 19-20, 1559, waiting only for the light of modern underwater archaeology to rediscover this forgotten era of Spanish explorers and colonists along the northwest Florida Gulf coast. 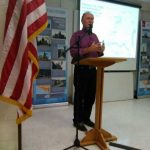 Above, Dr. Bratten of the University of West Florida presents updates on the excavations of the Luna colony and associated ships of Old Pensacola.
Standard photo/ Lydia Grimes