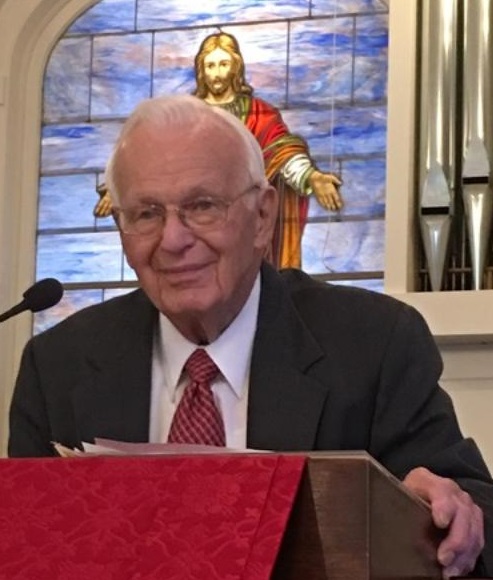 The Brewton community lost one of its most beloved citizens on Dec. 23, 2019 with the death of Frank L. Scott, 91, of Alco Drive.

Rev. Scott was a native and a long time resident of Brewton and was Pastor Emeritus of Brewton First United Methodist Church.

His wife of 51 years, Ann Flower Scott and his parents, Franklin and Leila Scott, who owned “Frank’s Garage” in downtown Brewton, and his brother, Troy B. Scott, preceded him in death.

He graduated from T.R. Miller High School in 1946 and set out immediately to become a pastor. He attended Birmingham Southern College and was graduated from Troy State University in 1952.

He went on to serve congregations in the Alabama West Florida Conference for 43 and one half years, which included Andalusia, Ariton, Dothan, Camden, Evergreen, Blountstown, (Fla.) Selma, Greenville, Montgomery, Prattville and Bay Minette

After he retired, he served as a retired supply pastor for seven years in Pollard. A Prayer Labyrinth at Blue Lake Methodist Camp and Retreat Center near Andalusia was generously built and named in his honor by the Brewton/Pollard congregations in 2012.

In 2018 he was named Pastor Emeritus of the Brewton United Methodist Church as a surprise celebration organized by a minister and congregation who cared and wanted to show their love and admiration for their “beloved Frank” for his many years of faithful service for his church family.

Rev. Scott had a zest for life in everything he did. From his Christian faith and ministry to his political beliefs and his support as a fan of the Alabama Crimson Tide, he put into each one his complete efforts. He counseled couples who needed his advice and help and was ready to perform the wedding ceremonies for those whom he counseled.

He shared the grief of members of his congregation as well as others he knew. Children who were baptized by him have never forgotten the special part he played in their lives. His ministerial outreach stretched well beyond the churches he served.

He bravely ministered the African American community during the 1960s-70s Civil Rights Movement and served as president of the Greater Brewton Habitat for Humanity, where he helped build 19 Habitat houses “with hammer in hand.”

Barbara Page has known Pastor Scott for many years, both in and out of the church. She said that someone gave him a chair that came from Harvard and he sat in it every Sunday morning.

“He was very faithful and everybody loved him,” Page said. “He was very knowledgeable about the Bible and he was a regular at McDonald’s where the workers were used to seeing him show up early in the morning.”

Rev. Bobby Ellisor, pastor of the church, said much the same thing.

“He was a great mentor,” he said. “I could always count on him to help me with anything I needed. He was more about how to put the focus on people over programs. We will miss him.”