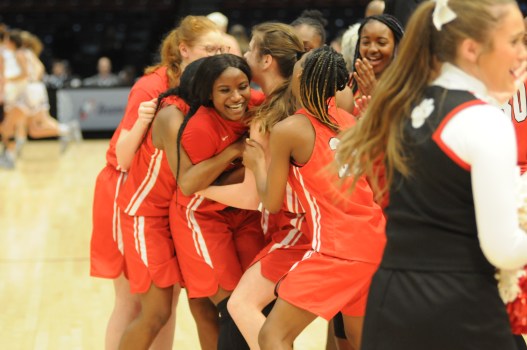 The team celebrated after the big win against Lauderdale County. 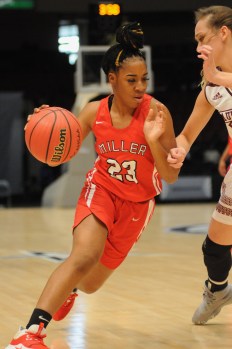 Ja'Nazsia Nettles drives in with the ball. 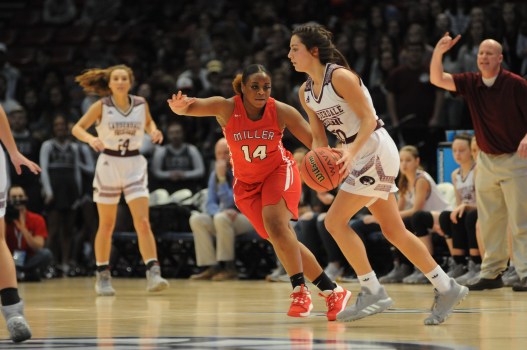 Raivon Ewing keeps her eye on the ball. 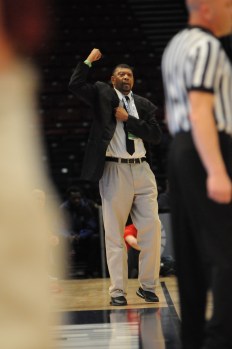 TRM Head Coach Ron Jackson was on edge as he anticipated the end of the game. 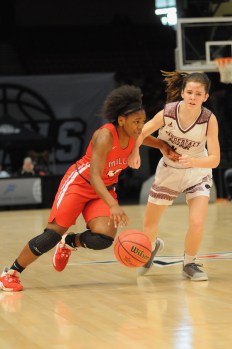 Vanessa Samuel protects the ball while driving down the court. 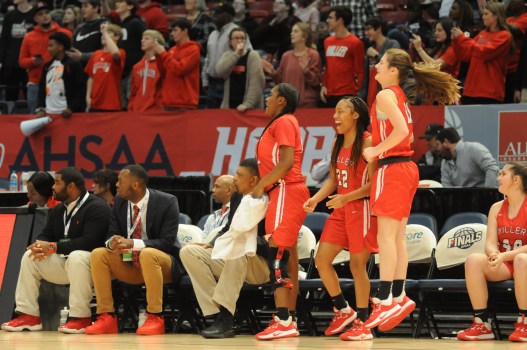 Teammates from the bench cheer the players on to the win. 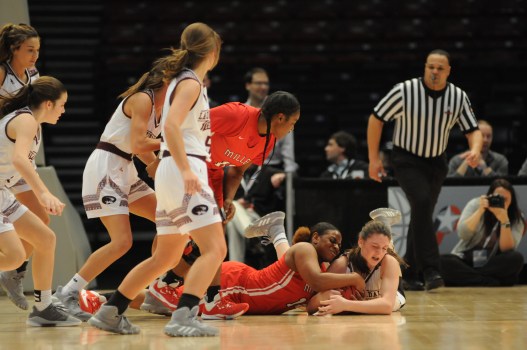 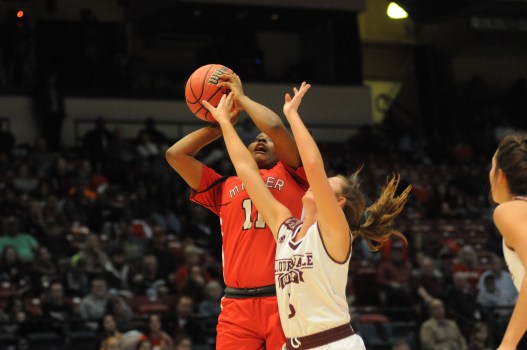 Aleria Smith takes a shot after a near perfect game from the field, shooting 10-of-13.

T.R. Miller’s Alijah Fountain and Aleria Smith scored 22 and 20 points, respectively, to help lead the Lady Tigers to a 50-44 victory over Lauderdale County in the AHSAA’s Class 3A state semifinals at Legacy Arena on Tuesday.

With the victory, TRM advances to face Pisgah on Friday at 12:15 p.m. in the state championship.

“My young ladies are happy and proud to be here,” Jackson said.

Friday’s game will be the first time TRM (28-1) will play in a state championship game since 2009.

After a slow start in the first, Smith got things going with a running jumper, giving the Lady Tigers a lead they’d never give up.

Smith added a 3-pointer a short time later, and the Lady Tigers’ defense, especially their half-court game, wreaked havoc on the outside shooters of LCHS.

Lauderdale’s Ruthie Smith, normally a threat from the perimeter, was held to 2-of-10 from 3-point range.

Smith guarded Maner in the game.

“Throughout this whole week, we’ve been practicing on it,” Smith said about defending the perimeter. “I kind of figured that when she gets the ball, she likes to do a little roll.”

Later in the first, Fountain got four quick points on drives to increase the Lady Tigers lead to 11-2. Lauderdale’s Sydney Maner answered with a 3-pointer, and TRM led 11-5 after the first period.

Lauderdale County got it close in the second period, thanks to a Leah Childress 3-pointer and a Maner drive to the basket.

Smith then answered with a 3-pointer for TRM, and Maner hit three free shots to cut it to 17-15.

The Lady Tigers of Brewton entered the fourth period with a 36-27 advantage.

Throughout the game, TRM played a keep away game with LCHS.

Jackson said he instituted the strategy because LCHS installed their trap defense.

“They were keeping us off balance,” Jackson said. “One thing we like to do is trap, and we like to pass the ball and a lot of it was us doing that.”

Fountain and Smith added four more points to pad the lead, and put the game away.

With less than a minute remaining, Fountain hit two free throws for a 47-38 lead.

During the game, Fountain, Smith, Ja’Nazsia Nettles and the rest of their teammates played up to what it’s like in the semifinals.

When asked what it takes to play at this level, Fountain, Smith and Nettles said one thing each – experience, heart and hard work.

Fountain scored 10 of her 22 points from the foul line, and Smith was near perfect from the field, shooting 10-of-13.

“We picked a day to not play our best game,” Llewellyn said. “We knew we had to play well. I’m proud of the girls for continuing the tradition of making it this far.”