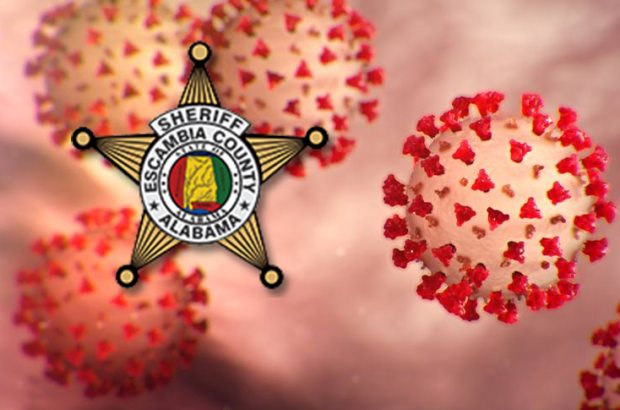 It’s business as usual at the Escambia County Sheriff’s Office with a plan in place to maintain services throughout the county.
Sheriff Heath Jackson said every precaution is being taken to keep inmates and staff safe during the current pandemic situation.
“We are screening inmates as they come into our facility,” Jackson said. “We are still responding to calls and taking every step to keep our officers safe as they respond to the needs of the citizens.”
As the emergency 911 call center, Jackson said operators are asking important questions of callers as they work to provide the response needed in a given situation.
“We are making sure to ask the questions of callers that are important for first responders,” Jackson said. “We ask about fever and other symptoms before sending people out. We’ve been doing that for a while now, even before anyone got sick. It’s something we always do to make sure everyone feels safe when responding to a 911 call.”
Along with taking care of response activities, Jackson said precautions are being taken inside the jail to protect inmates and staff
“We are continuing to monitor our inmates to keep them safe which keeps our staff safe,” Jackson said. “Even though it’s hard to prepare for something you’ve never seen, we’ve taken steps to be able to sustain our operations for at least six months if we had to. I hope it doesn’t last that long, but we are being as prepared as we can be. We have taken steps to make sure that we have the food and medical needs necessary for the inmates in our care.”
Jackson said with more than 300 inmates in custody at the facility, finding supplies may get a little harder if the pandemic lingers.
“When you’ve got 300-plus inmates to look after, it can be stressful at times,” Jackson said. “When you think about something seemingly minor like toilet paper it takes on a whole new meaning. If we had each inmate use just one roll of toilet paper a week, you’re looking at more than 300 rolls a week. If this situation goes on for a while, it can be stressful to make sure just that one need is met.”
Jackson said residents in the county shouldn’t be concerned about services typically provided by the Escambia County Sheriff’s Office.
“We are on the job,” Jackson said. “There may be a point in the coming weeks that some of our office staff may work on a rotating basis if our work is caught up. But, even if that happens, our officers will be in full-force and working regular shifts and patrolling our county to ensure the safety of our residents.”

Banks move to drive-thru service only

By: Lisa Tindell Banking has joined many other businesses in going to drive-thru only services. But, that doesn’t mean you... read more