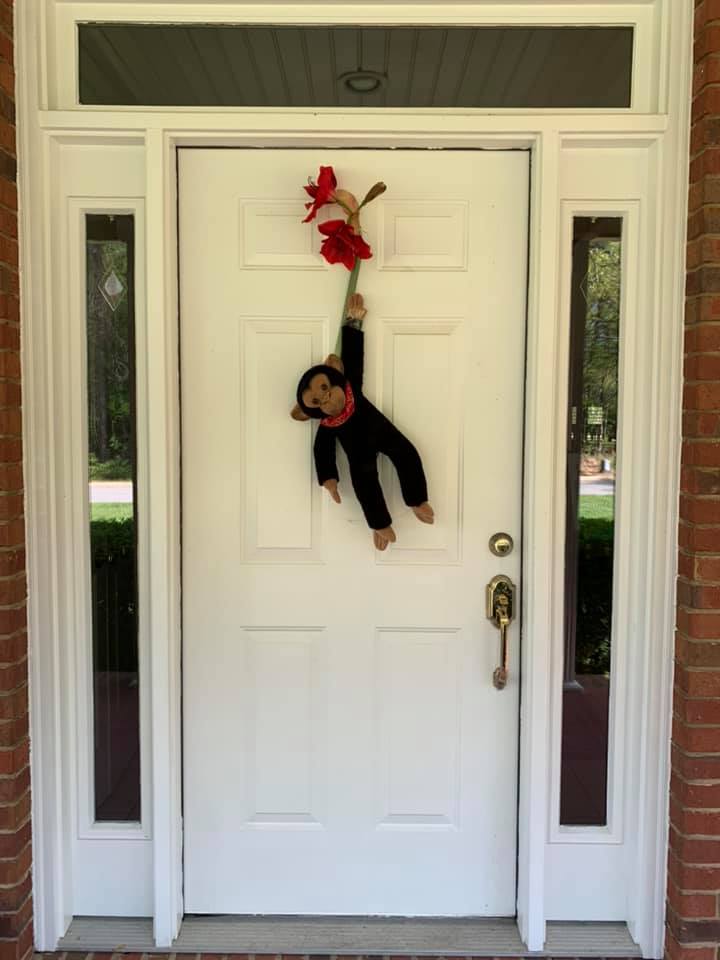 Along many streets in Brewton, stuffed animals like the stuffed bear above can be seen as residents find ways to bring joy during the social distancing health order. Submitted photo

Heather Walton got excited about the thought of bears invading a community and acted on it. After seeing an idea being put into action elsewhere, Walton thought the idea would do well in Brewton.

“I saw this being done up north and thought it would be a cute idea for our community,” Walton said. “Others have joined in and it’s taking on a life of its own.”

Lois Miller saw the idea and jumped on to join in as well. With some of the comments being made by some area residents, the bear hunting game took on a new twist.

“I actually saw someone suggest safari since some people mentioned they didn’t have a bear but had other animals,” Miller said. “My parents enjoyed our safari drive Sunday. I feel I need a car magnet that says, ‘Watch for sudden stops; on a safari drive.’”

Miller has posted information on her Facebook page – which seems to be an even more popular form of communications now – and has great response.

“What Heather Walton originally shared as a Going on a Bear Hunt has taken a new twist locally,” Miller said. “You know Brewton likes to take ideas and make it our own for our community.”

In response, area residents have put everything from teddy bears to monkeys in the windows and on their front porches. A polar bear and even an elephant have also been spotted at area homes.

“This is just a fun thing to do,” Miller said. “It’s a great safe way to get out during quarantine!”

And the fun isn’t limited to those who live inside the city limits of Brewton. Miller, who lives on Hwy. 31 North, has her own part of the menagerie on her mailbox. Others who live in rural areas of the community have joined in as well with opportunities for spotting animals on Kirkland Road.

For those who want to join in the activity, Miller suggests finding any kind of animal and placing it in a visible area at your home, driveway or mailbox.

“It’s as simple as placing a stuffed animal in a front house window, on the front door, on the front porch, on a fence or sign post, on a chair, or anywhere that people can see it as they drive or walk by your home,” Miller said.

Habitat for Humanity still hard at work amid pandemic