An East Brewton man is behind bars on a $100,000 bond after the East Brewton Police Department performed a bust on his Ball Lane home.
Devante Knight, of 210 Ball Lane Lot 36, in East Brewton was taken into custody in the early morning hours of May 22 according to Sgt. Paige Howell with the East Brewton Police Department.
“Mr. Knight had some warrants out for his arrest from other departments,” Howell said. “We received word at about 2 a.m. on May 22 that he was at the Ball Lane trailer park and had just returned from Century (Fla.) with a load of narcotics.”
Howell said the Escambia County Sheriff’s Department assisted with the raid on the home that was also occupied by the suspect’s girlfriend, Vanessa Samuel.
“When Ms. Samuel came to the door, we spoke with her and she admitted that the suspect was in the back bedroom of the residence,” Howell said. “We were told he did have a weapon, but we were able to call him out with our guns drawn and he surrendered without incident.”
Howell said a search of the home revealed several different kinds of illegal narcotics.
“Our next step was to clear the room where he was at the time of our arrival,” Howell said. “We really didn’t know if anyone else was there. As we entered the room, several different kinds of drugs were in plain sight.”
Howell said his department found 20.0 grams of cocaine; 1.3 grams of methamphetamine; 20.9 grams of ecstasy; 5.3 grams of marijuana and 5.9 grams of crack.
“We also seized $1,550.04 from the suspect’s pocket,” Howell said.
Howell expressed thanks for the assistance BP of officers with the Escambia County Sheriff’s Department. 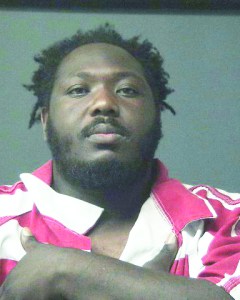