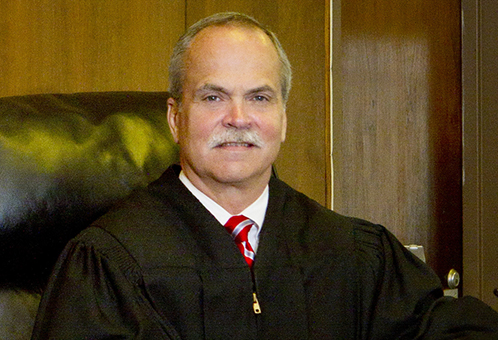 Longtime Escambia County Circuit Judge David Jordan is retiring from a position he was called to serve after more than 17 years.
Jordan’s retirement is effective on August 1, 2020.
“It’s been a great honor for me for the last 17-and-a-half years to serve as a trial court judge for Escambia County,” Jordan said.
Jordan served as a district judge for 12-and-a-half years as well as a juvenile judge. He then went on to serve as circuit judge six years ago. For 17 years previous, he practiced law in Brewton.
“It’s been a wonderful judicial career,” Jordan said. “I’ve been thankful to the people of Escambia County who have elected me three times.
“I appreciate the faith and confidence they placed in me to handle a serious job,” he said, adding that it was a position with an obvious amount of responsibility. “But there is a time for everything. Through time and prayer, I believe this season of my life is over. I’ve decided to see what God has for me to do in the next chapter of my life.”
Jordan said he’s been eligible to retire since January, but with the COVID-19 pandemic shutting down in-person court proceedings, it made the decision a process to make because he really enjoyed presiding over jury trials.
“It’s been difficult,” he said. “That has a lot to do with the timing, with the pandemic, and the decision process to a point.”
Since he’s been a judge, Jordan has helped steer the Drugs Erase Dreams, juvenile and drug court programs.
He said he’ll always treasure his time with the Drugs Erase Dreams program, which reached out to all schools in the county. Additionally, he said Ruth Harrell was a great partner in the effort.
“That was something that I took a great deal of fulfillment from, being able to go in and mainly go to the kids to talk to adults and try and get the word out about the dangers of drug usage and respond to the deluge of problems that we see in the court system that are wrought on people’s lives,” he said.
Jordan said the most fulfilling aspect of the job has been working with the juvenile court and program.
He said the program has been in place to help encourage kids to realize their maximum potential and try to get them to recognize all of their options and opportunities and not neglect their potential.
On the Family Drug Court program, which was established in the county in 2007, Jordan said he learned through the court process how powerful addiction is.
“I don’t know what it’s like to be addicted to anything, but I respect the power of addiction,” he said. “Through that process, we’ve had so many positive results, not only graduates.”
Jordan recalled one participant who came through the program, saying she was quite hesitant to heed his rulings.
“One of the early participants fought me,” Jordan said, adding that an employee of the program, Irene Johnson, was so compassionate and concerned about the participant. “This young lady was fighting me tooth and nail. I said ‘Irene, why is she here? She’s not going to do anything.’ Irene said, ‘Just to give her a chance.’ I said ‘she’s not going to make it.’”
Jordan said Johnson countered with the fact that the participant will make it.
“Irene was right,” Jordan said. “That young woman – and it didn’t happen overnight – she fought me for nine months. I think ultimately she got on board with it. She had everything in life going against her. Once she turned and got on board with us, she rose up through that and all of the adversity and crutch as an excuse. She graduated and her twin daughters sang at her drug court graduation. Everybody was crying including me.”
Jordan said he’ll keep his retirement plans open, saying he has some ideas.
“I definitely want to go into the practice of law,” he said. “I want to go back and practice, but I’m not sure what it’s going to look like.”
Jordan added that he wants to explore going back into mediation litigation.