Shake it up! Cool off with these milkshakes

As the temperatures continue to rise, my thoughts are turning to something cool and refreshing. The first thing that pops in my mind is iced or frozen drinks including milkshakes! It just seems that there isn’t anything better than ice cream mixed with some fruit and just a splash of milk bended up into a smooth, refreshing drink.

Blending the concoctions may seem like a no-brainer but the truth is getting the ratio of ice cream to milk, or fruit to ice is an art. One I have not mastered but am making every attempt to get the perfect mix for the perfectly refreshing drink.

I have read up on a few tips given by some folks who swear they are experts in the field of blended drinks that have been somewhat of a help. Apparently, you don’t just dump all of the ingredients in at one time and whirl the blender for a bit. There is a method to making a milkshake that may be a little different than what you’ve done before.

For starters, you don’t begin with ice cream. For the smoothest milkshake, put in the milk and whatever you’re mixing in, such as fruit, and blend before adding the ice cream. Apparently getting the mix-ins smooth is key to a well- blended shake. One thing to remember is to let your ice cream soften just a bit before adding to the blender. If the ice cream is too hard, you may end up having to add more milk which will thin down the entire mixture. And, another thing to remember is that if you don’t get the fruit smooth before adding the ice cream, you may end up with large frozen chunks of strawberries, pineapple or whatever you’ve added. Getting a frozen strawberry stuck in your straw just puts a damper on the enjoyment of the drink.

Now, I for one, don’t require my milkshake to be decorated before indulging, but if you want to add things like sprinkles, then go for it. Although they do make a shake pretty, most smaller additions need to be reserved for garnish. Sprinkling on a few mini chocolate chips and a little cocoa after you’ve poured into a glass is perfectly acceptable, but those same mini chips can become like rocks if mixed in during the blending process.

So, with all of that in mind, these ratios are believed to be best for optimum results. Use one-third cup milk for one and a half cups of ice cream and anything you want to blend into the mix. Think about throwing in a swirl of chocolate syrup, a spoonful of peanut butter, one last thing to remember, even though you may want a rich shake, adding heavy cream is not the best idea. If you pour in heavy cream instead of milk, you may end up with bits of butter in the shake.

Get out the blender, spoon up some ice cream and pour in the milk. Summer just begs for these wonderfully cool drinks.

Blend well in a blender or use an immersion blender to reach the desired consistency.

Mixed Berry: Make Strawberry Milkshakes (No. 5), replacing the strawberries with 1/2 cup each raspberries and blueberries. 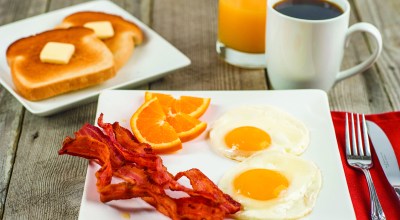 Bacon, sausage: Not just for breakfast