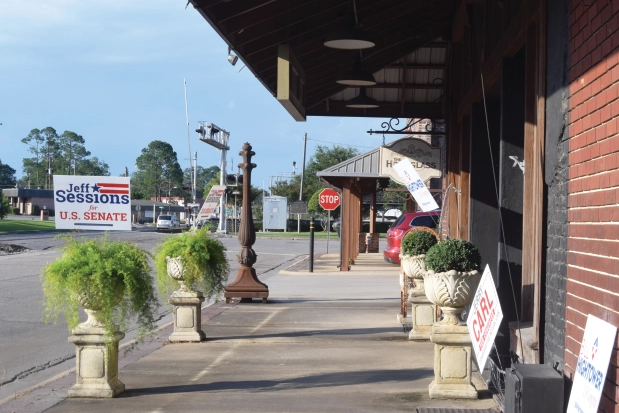 Above,campaign signs greeted all guests to the forum.

The Escambia County Republican Party hosted a candidate forum on Monday. Welcoming Senator Jeff Sessions, Commissioner Jerry Carl and State Senator Bill Hightower, the event was held at the Hourglass at 6 p.m. With many in attendance, Chairwoman Jackie Gay welcomed all guests to the meeting. After conducting new business and making special announcements, Gay introduced Senator Sessions. “Thank you, Brewton is a great town in America, not just Alabama,” said Sessions. Currently, Sessions is running against Tommy Tuberville to reclaim his seat in the U.S. Senate.
“I love this state, I feel like I came out of the dirt of this state, I was educated in this state. I understand our values and I am proud to represent them,” he shared.
During the meeting each candidate was allotted time to speak and answer any questions.
Commissioner Jerry Carl spoke highly of the people of Escambia County. “I love an excuse to come up here, y’all are my people,” said Carl. Carl is running for Alabama’s 1st Congressional District against Bill Hightower in the Republican primary runoff. Following Carl, his opponent, Hightower, addressed the crowd.
Following the meeting, guests were invited to a dinner at Camp 31. The runoff is scheduled for July 14. For the July 14 Primary Runoff Election, the deadline to register to vote is Monday, June 29, the deadline to submit an absentee ballot application is Thursday, July 9, the deadline to return an absentee ballot to the Absentee Election Manager is the close of business Monday, July 13, and the last day to postmark an absentee ballot is Monday, July 13.