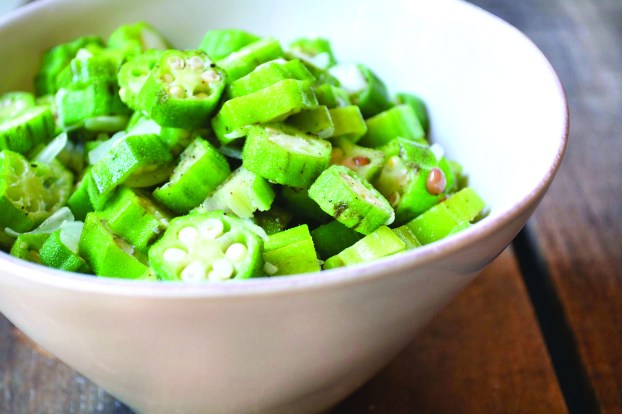 Okra and the love-hate relationship

There are some things in this world that you either love or you hate and it’s usually easy to determine which things go into each category. Let me apologize before I tell you that okra – in any shape or form – quickly goes into the “hate” column for me. And, yes, I know that may have some of you questioning my southern lineage, but I assure you I am about as southern and about as country as you can get.
With that being said, I can probably go back in my youth to almost pinpoint when I solidly decided I didn’t like okra. It was when I was about 12 or so years old and sat down at my grandmother’s dinner table that was filled with wonderful vegetables from the harvest at the time. On the table was a large platter of fried pork chops, bowls of all sizes filled with things like creamed corn and field peas, and a huge plate filled with ruby-red sliced tomatoes. On the end of the table were two plates filled with crusty wedges of corn bread and there may have even been a jar of pepper sauce somewhere in the mix.
As I began to watch as my family helped themselves to the bounty before us, I can remember watching my father reach for that bowl of peas. But for some reason, this bowl of peas looked odd. Floating on top of all that wonderful pea juice (or pot liquor, if you prefer) were tiny pear-like bits of something. As my father pulled that big spoon filled with peas up from the bowl, there as a stringy, slimy substance hanging from the utensil. When I realized what it was, it was there and then that I decided: “Yep, I’m done with okra or anything that resembles it.”
Now for those of you who know me, I have been known to eat okra in its fried form, but it is rare and it must be individual pieces (you know, like you get from a restaurant) not like the kind grandmas around the south prepare using only a little bacon grease and a handful of cornmeal in their iron skillets.
Again, I am sorry. But, just to show I don’t judge those who eat this slimy mess, I have been known on too many occasions to number to prepare big pots of okra stewed down with tomatoes and onions for those I love. I just have to go by feel on whether I’ve prepared the dish properly, because I am not about to even taste it to see if it needs more salt or pepper.
Just a couple of weeks ago, I was watching a cooking show and realized that I was right that not all gumbo is required to have okra in it. I know that “Gumbo” is the African word for okra, but there are other ways to get to that gumbo flavor and texture without the use of okra. But, that will be another column one day.
For those of you who find yourself putting okra in the “love” category of foods, I have tried to come up with a few recipes that you might find enjoyable. You give them a try and let me know. I promise I’ll take your word for it.

These recipes are ones that I have found that might just be something okra lovers would enjoy. I won’t be tasting them myself, so slice up that slimy vegetable and enjoy the bounty of the season.

Stewed Okra and Tomatoes
4 slices bacon
1 onion, chopped
3 cups sliced okra
1 (14.5-ounce) can diced tomatoes
Kosher salt and freshly ground black pepper, to taste
In a heavy bottomed saute pan over medium-high heat, add the bacon. Render the bacon until crisp. Remove from pan and reserve. Add the onion and saute until tender, about 3 minutes. Add the okra and tomatoes, making sure to add the reserved juice from the tomatoes to the saute pan. Season with salt and pepper and simmer for 15 minutes.

Whole Fried Pods
1 pound okra, preferably small pods
Buttermilk, enough to cover okra
3/4 cup flour
3/4 cup cornstarch
Kosher salt and pepper
Cayenne pepper, to taste
Hot pepper vinegar or cider vinegar, to serve
Pour a few inches of peanut oil into a heavy-bottomed pot, preferably cast iron. Heat oil to 350°, using a fry/candy thermometer to make sure the temperature stays consistent. Meanwhile, soak the okra in enough buttermilk to completely cover. In another bowl, stir together flour, cornstarch, 1 1/2 teaspoons kosher salt, a few grinds of freshly ground black pepper, and a pinch of cayenne. Dredge the okra in the dry mixture until well-coated. Working in small batches, cook the okra in the hot oil until crispy and light golden brown, about 30 seconds to a minute. Adjust the heat as necessary to keep the oil at 350°. Remove the fried okra from the oil with a spider or slotted spoon and allow to drain on brown paper bags. While still hot, season the okra with additional kosher salt and a generous splash of hot pepper vinegar. Serve immediately.

Let me just start this week’s column by saying I am old. Yep, I’m no spring chicken and with my... read more