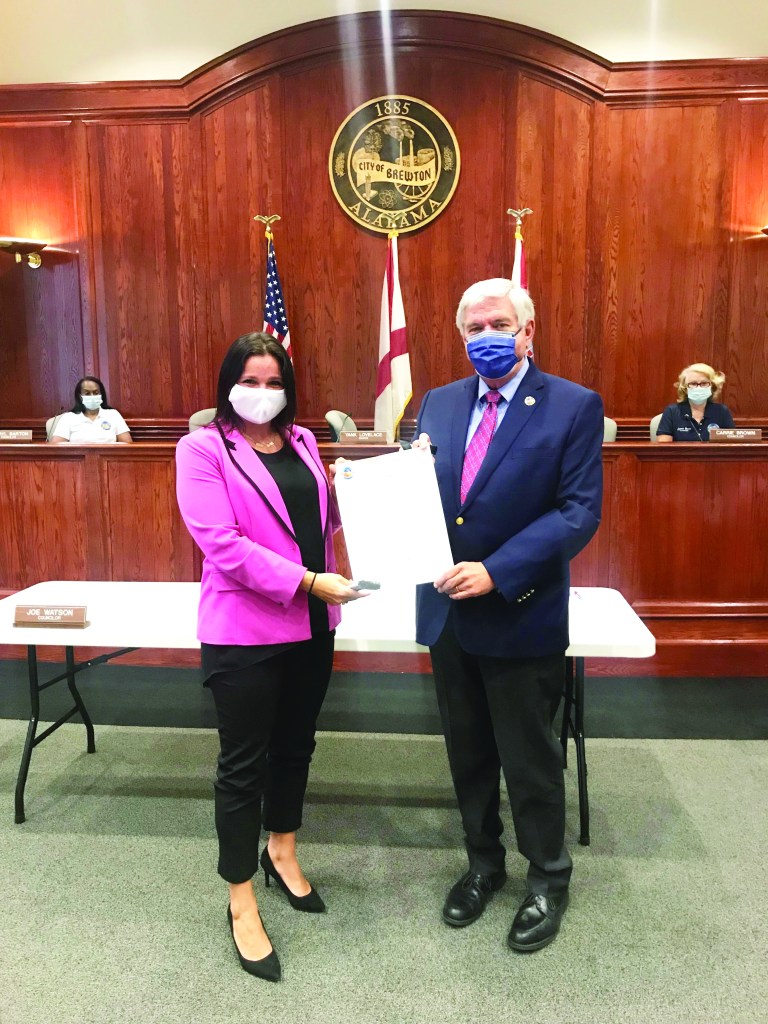 Above, Mayor Yank Lovelace presents Attorney Sabrina Ruffin with a key to the city in recognition of legal expertise provided to the city. Standard photo/Barrett Edge

Attorney Sabrina Ruffin was recognized during the council meeting on Monday. Before closing the meeting, Mayor Yank Lovelace and the council recognized Ruffin for her outstanding community service to the city of Brewton. Reading a proclamation, Lovelace stated, “The city of Brewton seeks to support and encourage outstanding leadership. Distinguished Attorney Sabrina Ruffin has gone above and beyond to provide legal expertise to the city of Brewton.” Ruffin was noted as the “Key to economic development,” and presented with a proclamation and key to the city.
Three public hearings took place during the meeting. The first public hearing dealt with the Optimi project. The next public hearing focused on the rezoning of 1704 North Street and 1835 Douglas Avenue from R-1 to B-3. “This public hearing of the rezoning TRM high school project, not including the football stadium to that property. The commission has already approved it. We are asking the council,” said Code Enforcement Officer Lawton Shipp. No others spoke in support or against the subject, and the rezoning was approved. The third hearing approved was the amendment of land use and development ordinance concerning non-permanent structures and landscaping.
Before moving into new business, Mayor Yank Lovelace took note of the many years of service Code Enforcement Officer Lawton Shipp has served the city. “After numerous years of service to the city, on behalf of the council, I would like you to know we appreciate all the years. We appreciate all your hard work,” said Lovelace. Shipp will be retiring at the end of the month.
In new business, Lovelace appointed Steve Yuhasz to a city planning commission position. The municipal airport lease agreement between the City of Brewton and the U.S. Navy was unanimously approved. Next, a request for an opinion from the Alabama Attorney General’s office was approved as well as the substitution of a firefighter museum of Brewton for the Forestry Museum in the “Master Plan”.