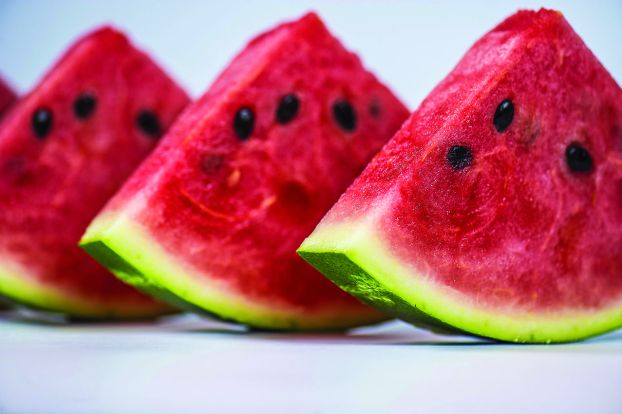 Above, the juicy summer fruit cools off any summer day. Submitted photo

After admitting that I don’t like okra in last week’s column, I’m betting that this week’s installment will certainly have somebody asking for me to turn in my “southern card” and it would certainly be justified.
I am not a fan of melons of any kind. I don’t like watermelon, cantaloupe, honeydew or mush melon. I don’t like kiwi because the taste reminds me of melon. I know it’s hard to hear, and I have taken a ribbing for my dislike of melons for most of my adult life. I assure you that I am truly a Southern woman and to prove my point I am a huge fan of peas, butterbeans, corn, tomatoes and a good hunk of cornbread (and if you throw in a few cracklings, I won’t be mad).
I can remember eating watermelon as a child and watching my family partake in the huge, green fruit all through the summer. As a matter of fact, back when going to the creek for a good swim was the pure definition of summer family time, we would always have a watermelon or two cooling in the edge of the flowing water. We would play and swim and at some point the adults would pull out the grill and throw on some hotdogs or chicken and the cans of pork and beans would be opened for a meal. Afterwards there would be the ceremonial cutting of the melon and handing out pieces to everyone in the group. With five in my family and three or four relatives along for the day, that melon fed a bunch of folks making a great dessert at the end of the day. After devouring the red, juicy flesh of the melon the games would begin with seed spitting contests followed by chasing each other down and throwing the rinds at each other in a truly southern game of tag.
Although it’s been many years since I been to a creek for a swim, I still enjoy reliving those memories complete with the escapades involving the watermelon.
I know that watermelons are still being harvested in our area and if you’re looking for one, you can probably find a vendor or two at the Murder Creek Bridge most any day of the week who can make your melon dreams come true.
My daddy loved to eat his melon with a little sprinkle of salt and of course, I ate mine that way a few times myself. After the flesh of the fruit had been consumed, my mama would haul all the rinds to the kitchen and begin the process of peeling, cutting, trimming and cooking the rinds in preparation of making preserves that would be added to the dinner table in the cooler months of the year. It was just one way my family had of enjoying watermelon well beyond the harvest season.
With today’s growing capabilities of farmers around the world, there’s a good chance you could even have watermelon on the table at Christmas if you want it. But, even though I’m not a fan, I can guarantee those Christmas melons won’t have near the flavor and appeal of one harvested by the farmers in South Alabama.
If you’re looking for the best way to tell if a watermelon is ripe and ready to eat, there are a few things you should keep in mind. Look for a lighter spot on the watermelon where it rested in the field. It’s called a field spot and if it’s white, it’s not ripe. If the spot is yellow, it’s ready to eat. It should also feel heavy which means there is usually more juice inside. But, if you’re an expert at the thumping methods, go ahead and use that process.
I do have an idea that there are ways to consume watermelons that I might enjoy. And with that in mind I’ve searched out some recipes that I’ve seen prepared and have even tried a time or two in an attempt to retail my southern card.
I hope that you’ve enjoyed the watermelon season so far this summer. I encourage you to get a few and try out a new way to eat it that will continue to give you pleasure. The southern season will end soon and the watermelon vendors will be unable to provide you with one for your summer cookout. Let me know if you try any of these recipes and what your thoughts are on them. If you like them, I may have to give watermelon another try.

Watermelon Rind Preserves
Ingredients:
4 pounds of chopped watermelon rind
1 gallon water
1/2 cup salt
9 cups sugar
8 cups water
4 tsp. crushed cinnamon stick
4 tsp. cloves
4 lemons, rinsed, sliced and seeded
1 dash of red food coloring (optional)
Prepare:
Peel off the green part of the rind and slice into 2-inch pieces. Soak the rind in a solution using the gallon of water and 1/2 cup salt and soak overnight.
Remove the rind from the salt water and place into a stockpot of clean water just to cover. Bring to a boil over medium-high heat and cook for about 30 minutes or until the rind is tender. Drain well. In a large pot, combine sugar, 8 cups of water and the sliced lemons. Tide the cinnamon and cloves in a cheesecloth bag and place in the pot. Bring the syrup to a boil and boil for 5 minutes. Add the rinds and cook until they are transparent. Remove the spice bag and stir in the red food coloring if you’re using. Ladle the preserves into hot, sterile jars and process to seal. Place jars in a canner and cover with water. Bring to a boil and boil vigorously for five minutes. Remove to cool.

Watermelon Salad
Cook’s Note: Using a seedless watermelon for this recipe is best, but if you can’t get your hands on a seedless one, be sure to take out the seeds before cutting the melon for preparation.

Ingredients:
8 cups watermelon (about an 8 lb. melon will work)
1 cup of sliced cucumbers
2 ozs. crumbled feta cheese
Zest of 1/2 lemon
4 to 6 basil leaves, sliced
Sea salt for garnish
Prepare:
Cut watermelon into bite size pieces and toss on a platter with cucumber slices and sliced basil leaves. Sprinkle over feta cheese and lemon zest. Sprinkle on sea salt and taste for seasoning and adjust as necessary. You may also add a few grinds of pepper and a drizzle of olive oil over the platter. Also, some cooks drizzle on a little basalmic vinegar as well.

Prepare:
Slice one baby seedless watermelon in half lengthwise. Trim a little off of the rounded edge of the watermelon, so it sits up like a bowl without rolling around. Use a spoon to scoop out the watermelon flesh of one half—being careful not to scoop all the way through the trimmed bottom—forming a bowl with the watermelon rind. Dice the watermelon flesh into bite-sized pieces.
Pour the diced watermelon, mango, onion, jalapeño, lime juice, lime zest, salt and cilantro into a large mixing bowl, tossing to combine. Spoon the salsa into the watermelon bowl. The salsa tastes better as the flavors sit, so if you can, refrigerate this for 20-30 minutes before serving. Serve with tortilla chips.

Okra and the love-hate relationship

There are some things in this world that you either love or you hate and it’s usually easy to determine... read more