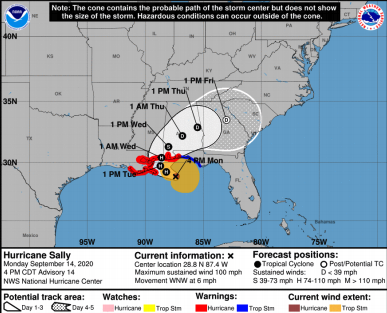 Director David Adams said in an email that the hurricane is showing expected landfall near the Alabama-Mississippi line Tuesday night as a strong Category 2 storm.

Current sustained winds are at 100 miles per hour with a forward speed of 6 mph to the west northwest.

“Flooding is a real threat with this storm,” he said. “Isolated tornadoes are possible throughout the area.”

Adams said conditions should start to worsen during the day tomorrow.

“Heavy rainfall and winds may persist through most of the day Wednesday,” he said.

Other points Adams included include:

• A significant flood event for some areas is likely.

• There is still a greater than normal uncertainty and the track could still shift further east.

• This will be a prolonged event given the slow movement of Sally.