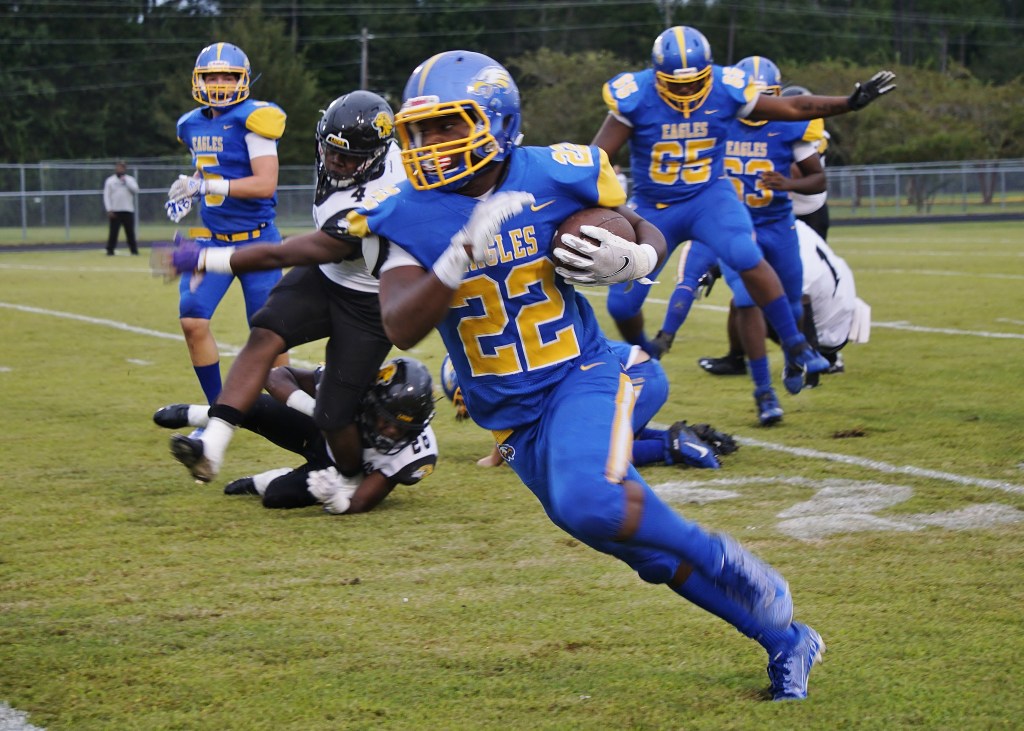 The W.S. Neal Eagles fell to the Williamson Lions 14-3 in a rainy Monday night region game at home.

The Lions won the toss and elected to defer, so Neal received the kickoff to start the game.

Both teams seemed to struggle with the wet conditions and saw multiple penalties in their first possessions.

Both teams traded punts for most of the first half, until, with 1:09 left to play in the second quarter, the Eagles drew first blood on a 28-yard field goal by Neal senior Isaac Bonam, putting the home team up 3-0.

The Lions answered with a drive ending in a 6-yard touchdown pass with 12 seconds left to play in the half. The two-point conversion failed, giving Williamson a 6-3 lead at halftime.

The Lions received the kickoff to start the second half of the game but turned the ball over when Neal senior Joe Carroll intercepted a pass on Neal’s 30-yard line. The Eagles were unable to convert, losing the ball on a fumble five plays later.

The Lions found themselves at first and goal from the six-yard line, when penalties and a tough Eagle defense forced a turnover on downs, giving the Eagles the ball on their own six yard-line. A Neal fumble was recovered by the Lions’ defense and run into the end zone for a touchdown. The two-point conversion was good, giving Williamson a 14-3 lead with 5:32 left in the third quarter.

Both teams traded punts for the rest of the game, making 14-3 the final score.

Head coach Andro Williams said he is proud of his players who put their heart into the game, but that the team as a whole needs to find a way to focus.

“Our guys that play with heart the entire time, I applaud their effort. That’s what we’ve got to do,” Willams said. “We’ve got to have more guys bringing more heart to the table consistently. We’ve got to put away the worries of the world with the COVID and the hurricanes and everything. We’ve just got to put it all on the field.”

“These kids work hard, and I’m proud of them for their efforts and their work ethic, but we’ve got to bring it to the field and keep it there on a high level,” he added. “We played a great first half for the most part. We made some mistakes, but we played a great first half and right there are the end, we got those three points, and we lost focus. I think we’ve just got to get consistent and stay on a high level the entire time.”

The Eagles had a total of 10 first downs to the Lions’ 7.

The Eagles will face off against New Brockton in an away game, Friday night with kick-off set at 7:00 p.m.