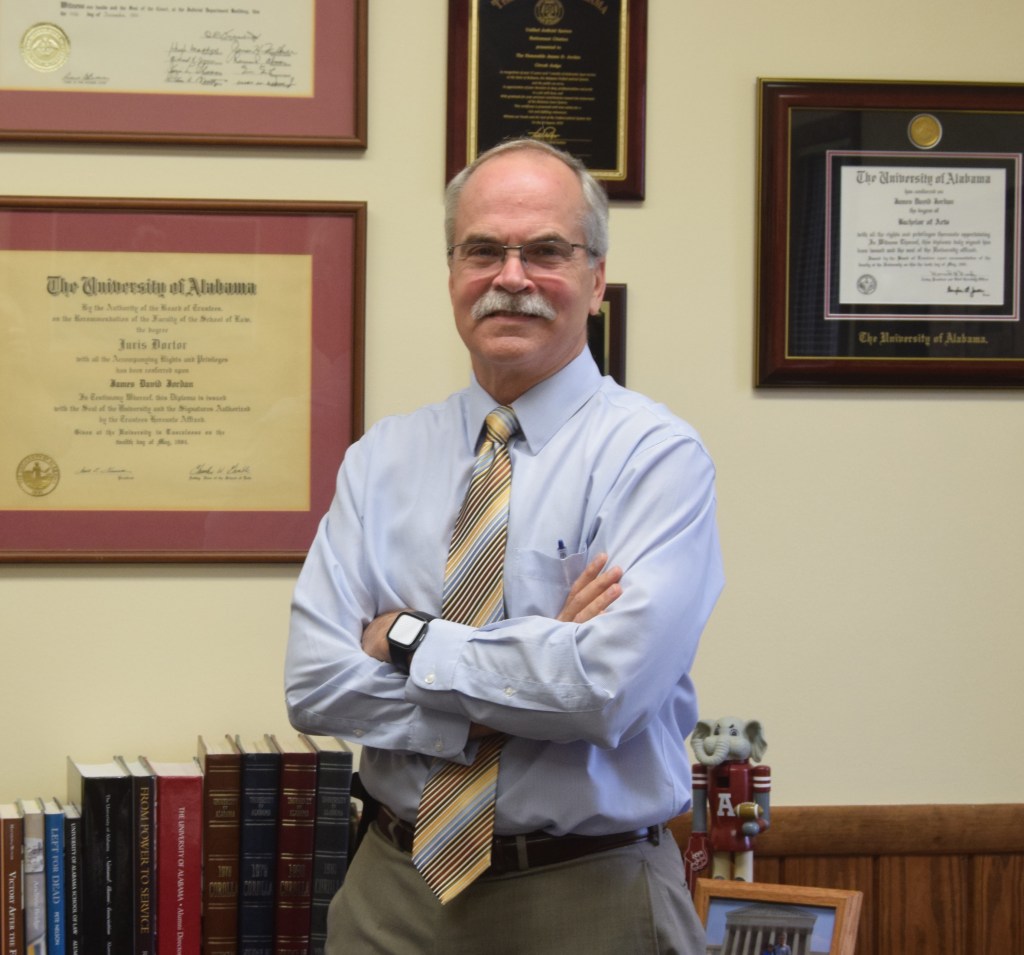 Life travels in circles sometimes, and David Jordan has experienced a circle of his own.

After finishing law school at the University of Alabama, the Choctaw County native had plans of being an attorney in Mobile. However, as Jordan would discover, life had other plans.

“I met Becky (his wife) in Mobile soon after I graduated and started clerking for an attorney in Mobile,” Jordan said. “We met in August of 1984 and married in April of 1985. Our son, Matt, was born in 1987 and our plans took a different turn.”

The couple considered moving to Jordan’s hometown in Choctaw County, but didn’t feel the move would be in their best interest.

“For some reason, the pieces just didn’t come together,” Jordan said. “It was then we started looking at Brewton. But, I was nervous since nobody here knew me.”

It wouldn’t take long for Jordan to get acquainted with the people in Brewton, mainly Thad Moore.

“I made a few calls and Mike Godwin told me to call Thad,” Jordan said. “I did and we set up a lunch meeting at Willie’s and we just clicked. The rest, as they say, is history.”

“God’s hand has been on our family and career,” Jordan said. “I don’t know why he put me on the bench but it has been a great honor to be a trial judge.”

The move from judge back to attorney was one Jordan knew it was time to make earlier this year.

“What I loved the most was jury trials,” Jordan said. “When that was taken away when the pandemic hit, it took away the enjoyment for me. I loved talking to jurors as citizens. But, when that was gone, I knew it was time to move on to the next thing in my life.”

That “next thing” will be what Jordan sees as a return to the things he enjoys the most.

“I will be taking on some civil cases,” Jordan said. “I already have a few clients and hope to be able to balance civil cases with things like wills, estates and some family law matters.”

The family law part of Jordan’s experience on the bench was one that benefited families and children throughout the county in a profound way.

While serving as juvenile judge while on the district and circuit benches, Jordan tasked his assistance with thinking outside the box when it comes to solving the solution of juvenile delinquency.

“We were able to establish ‘Project Turnaround’ with some funding provided from the Department of Youth Services to help make a difference in the path some of the juveniles were on,” Jordan said. “Our program worked to solve problems with youth to keep them from continuing down a path that would ultimately lead them to jail or prison.”

That work allowed Jordan and his assistants to help people – a goal his has now as he returns to private practice.

“I love being able to help people and give legal advice,” Jordan said. “While I was a judge, I didn’t get to do that. A judge, by law, cannot give legal advise. But, now, I can advise people and counsel with them on the law. I had forgotten just how much I enjoyed that.”

Jordan’s new, or old, position is one that he picks up in the same building, in the same office he began his legal practice in 31 years ago.

“I hope to have a more low-key practice now,” Jordan said. “I’m still practicing law, but just in a lower gear.”

Jordan’s office is located in the Otts Moore law office building at 401 Evergreen Avenue in Brewton.