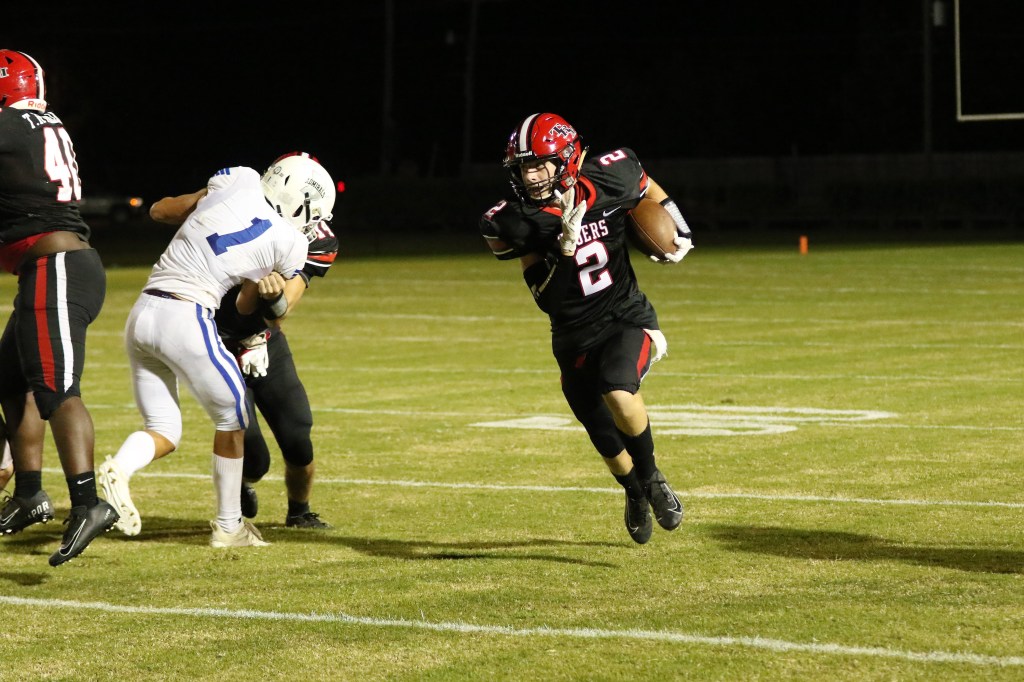 A rare Monday night of football in Brewton found the T.R. Miller Tigers hosting Bayside Academy Admirals.The shut-out action on the field would put Miller on top in the end downing the Admirals 35-0.

“Our defensive coaches had a great plan,” Coach Brent Hubbard said. “Our kids had great execution on that plan to help keep Bayside scoreless.”

With Bayside working on the first downs of the night, good coverage and pressure from the Tiger defense kept working the field to hold Bayside to force a punt.

Jarekus Walker was able find an interception from a failed Bayside pass. Orlando Gandy would find his way to the ball and get it into the end zone for the first score of the game. Point after kick by Hart is good and the Tigers go up 7-0 with just over five minutes left in the first quarter.

As Bayside tries to get something going, they are met with a tough defense. A big stand from the Tiger defense held Bayside back and forced a change in play on a fourth-down exchange.

Failing to make anything happen on downs, the Tigers are forced to give up the ball. Bayside couldn’t put together much success against the Tiger defense. Quarterback puts the air in the ball but doesn’t make a connection. third and 10 puts Bayside under pressure to make a play and found Wynn Brittain intercepting the ball. A penalty flag for block-in-the-back play against Miller would bring the ball back out for play. But Miller would get the ball on downs from Bayside, picking up a first down on the play. Darius Webb would take the ball to the first-down spot for the Tigers as they work to make it to the end zone again at the 24-yard line.  Bayside puts pressure on Jernigan and lost four yards on a sack. Second and 16, Jernigan gets the ball to Blevins to get the ball down the field for a third-and-eight situation. Gandy gets the ball and takes it down to the 16 to bring up a fourth and two. Webb gets the ball and takes it to the 10-yard-line for another Tiger first down. Campbell gets the ball and takes it to a first-down and would get it down to the two-yard line on the next play. Fountain and Gandy worked together to get the ball in the end zone again. A two-point conversion puts the Tigers up 15-0.

As Bayside gets the ball, a Tiger defense keeps them at bay. Webb gets a sack on the quarterback to prevent any progress for Bayside on the field. With no luck putting the ball in the end zone, Bayside gives up the ball to the Tigers.

After a first-down play, Gandy gets the ball and can’t be stopped as he takes the ball for 50 yards to put another touchdown in the books for T.R. Miller. The two-point conversion fails, but the Tigers go up over Bayside Academy 21-0.

A kick of the ball back to Bayside put the ball in motion, but a unyielding Tiger defense continued to put pressure on the quarterback. Runners were taken down quickly on each play. Working on a third-and-two, pressure forces a Bayside fumble to be recovered by the Cameron Capterville for the Tigers.

Unable to move the ball on downs, the Tigers punt to Bayside.

Bayside gets the ball but with Capterville pressure, the Admirals get a penalty for grounding the ball under the pressure. With Bayside on a second and 25 position, the quarterback can’t get anything moving because of pressure from a tough Tiger defensive line. Pick up on a couple of yards on the next few plays; Bayside is forced to punt back to the Tigers.

A Hart kick back to the Admirals gives the Bayside team a chance to make some movement. Some progress in the plays following the kick puts Bayside in a first-down position, but the Tiger defense keeps them from getting much further down the field. Gandy takes down an Admiral to stop the play and put them in a third and 28 spot on the field.  A punt back to the Tigers takes any chance at a score away from Bayside.

Unable to make it to the end zone, Miller punts to give the ball back to Bayside. Bayside continued to struggle in the game and fails to get into good field position for scoring. In a fourth-down position, the Admirals punt the ball back to the Tigers.

With just 5 minutes left in the game, Fountain gets the ball but only picks up a couple of yards. Making it a third-and-four position, Fountain moves to make a first-down. Two more plays would find the Tigers in first-down position on a Webb run.  Blake Jernigan keeps the ball and takes it all the way home for another Tiger touchdown. PAT is good putting Miller up over Bayside 35-0.

Bayside, try as they might, could not make anything happen against the Tiger defense and fail to score on the night. Brittain recovers a fumble by Bayside and the Tigers take a knee to end the game.

The win for T.R. Miller puts them in the undefeated category with a 3-0 record in regional play.

The Tigers will travel to Mobile Friday night to take on UMS-Wright in non-conference play. Kick-off will be at 7 p.m.