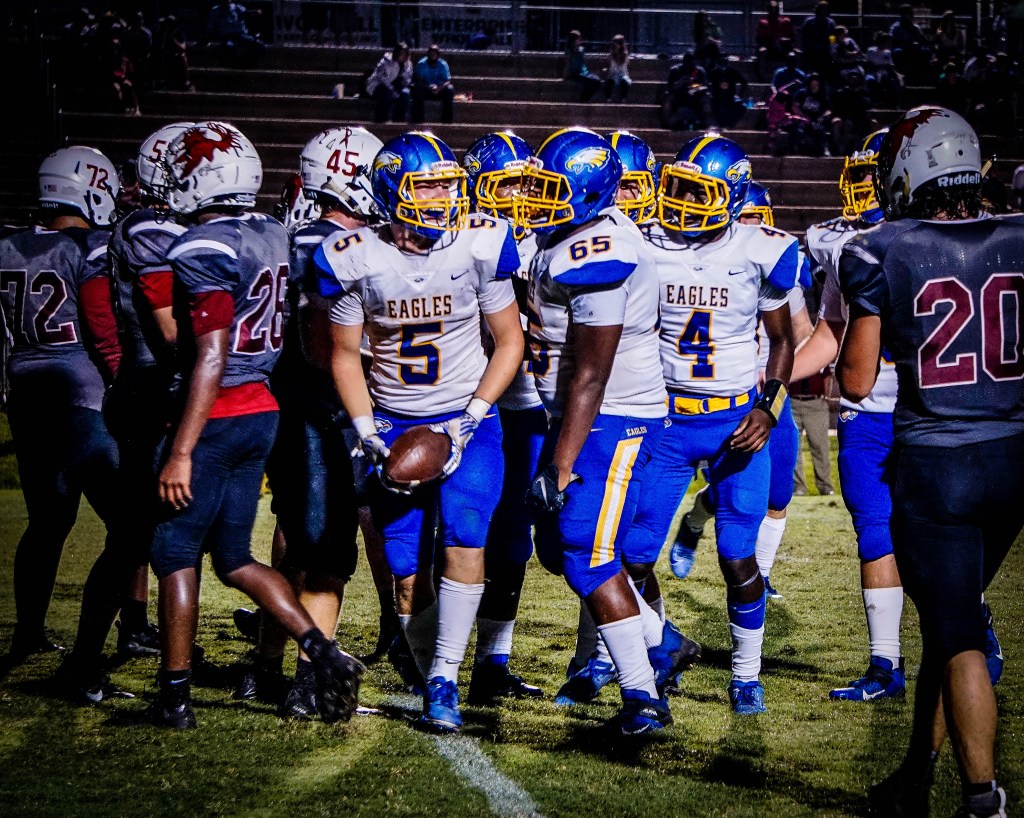 Neal made the long trip to New Brockton Friday night to bring home a big 44-25 win over the Gamecocks.

Head Coach Andro Williams is happy with his team’s win, and he has his sights set on continued improvement.

“We were glad to get the win tonight,” Williams said. “I wanted it to be prettier than it was. We had some self-inflicted wounds, again, that we’ve got to correct. We’re playing quality opponents. New Brockton is a team that’s on the rise. They’re a team that’s right there. They have a great coaching staff. You can tell they do a great job.”

“We’ve got to be able to make some in-game adjustments to help ourselves. I thought we jumped on them in a hurry early on, but we didn’t stay focused throughout the course of the game,” Williams said. “We’ve got to play every play and stay focused. Those are the things that we’ve got to try to make sure we work on.”

Neal got off to a strong start on both defense and offense. New Brockton won the toss and elected to receive but turned the ball over on downs on the Eagles’ 36-yard line after only four plays.

Three snaps later, the Eagles put points on the board with a one-yard push over the goal line by junior DaShawn Smith. Senior Isaac Bonam’s kick was good, and with only two-and a half minutes having ticked off the clock, the Eagles took a 7-0 lead.

Senior Samuel Bosarge executed an on-side kick that was recovered by his teammates, and the Eagles were off and running again, finishing the drive with a 6-yard jaunt into the end zone by sophomore LaKietric Barnes, giving Neal a 13-0 lead with 6:23 left to play in the first quarter.

The Gamecocks went three-and-out on their next possession, and Bosarge managed to tip the ball on the punt, giving the Eagles good field position on their own 45-yard line. Three snaps later, he took the ball on a 52-yard joy ride for another Eagle touchdown, giving his team a 19-0 lead with 4:17 on the clock in the first.

Neal’s defense forced another three-and-out, taking over on their own 19-yard line and needing only four plays to send Smith on a 63-yard sprint over the goal line and take a 25-0 lead with 19 seconds on the clock in the first quarter.

On their next possession, New Brockton managed to put together a drive that ended with a 6-yard touchdown run, just over two minutes into the second quarter. The PAT was blocked by Bonam, making the score Neal 25 – New Brockton 6.

An Eagle fumble, set the Gamecocks up for another scoring drive, ending on a two-yard touchdown pass with 6:43 left to play in the first half. The two point conversion was no good, but New Brockton managed to close the gap to 25 – 12.

The Eagles had time for one more score before halftime.

Bosarge ran 4 yards for the TD, giving Neal a 31- 12 lead that they would take into halftime.

The Eagles received the kickoff to start the second half, but a fumble on their own 28-yard line, gave the Gamecocks the momentum and field position they needed for an 8-yard rushing score and a good PAT, moving the score to 31-19, with the Eagles still in the lead.

Neal put together a nine-play drive, setting up a 6-yard touchdown run by Bonam and giving them a 37-19 lead with 5:10 on the clock in the third quarter.

The Gamecocks finished a 10-play drive by turning the ball over on downs on the Eagles’ 26-yard line, and the Eagles punted for the first time all night on their next possession.

Both teams would then score in quick succession, with New Brockton needing only one play to score on a 56-yard touchdown run by their quarterback.

Neal answered quickly, needing only two plays for Smith to take the pigskin for a 78-yard touchdown run, followed by a good PAT by Bonam, bringing the score to Neal 44 – New Brockton 25 with 8:59 left to play in the game.

The Gamecocks started their final possession of the game with a 46-yard pass, setting up first-and-goal from the 10-yard line, but a penalty flag for intentional grounding while under pressure by Bosarge and an interception by Neal junior Ruben Fantroy ended New Brockton’s hopes for another score.

The Eagles held the ball for the remainder of the game, finishing with a 44-25 win.

Coach Williams said he and his staff will work with the team to continue to improve through the season.

“[We’ve got] some guys that’re playing smart football and that’re doing the little things that we’re coaching them to do,” Williams said. “I can see people improving on a week-to-week basis. That’s what we want. We want to improve. We want the team to get better, and we want to do it the right way. That’s something that we’ve got to continue to sell as a coaching staff.”

Smith led the Eagles rushing with 187 yards and three touchdowns, while Barnes ran for 160.

Senior Mario Lane ran for 18 yards, and freshman Carter Hodges had one carry for 16 yards. Bosarge also had a 15-yard catch.

Neal was scheduled to play St. Michael Catholic High School this Friday as part of the homecoming events at the school

However, due to COVID-19 concerns, the game and associated activities has been reschuled for October 16 in East Brewton.