Tigers fall on the road 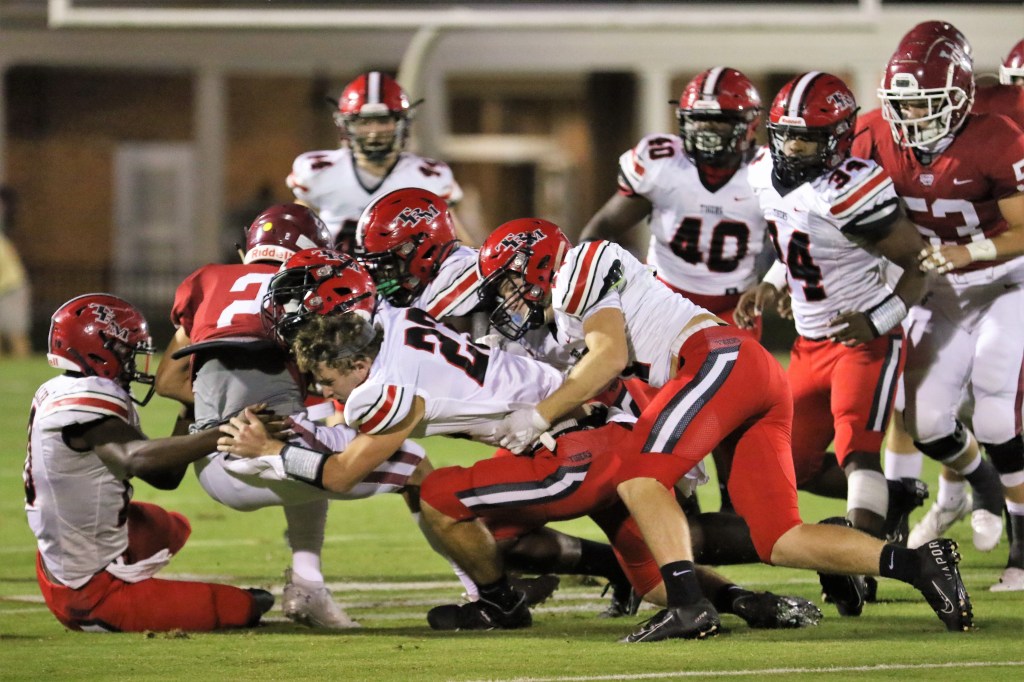 The Tigers traveled to the Mobile area Friday night to take on the Bulldogs of UMS-Wright High School. The trip would end with a loss on the night for the Tigers as the Bulldogs won by a score of 21 to 12.

“The kids responded well in the game,” Hubbard said. “I think we were in a little bit of shock right off the bat. This was the biggest stage some of the kids have been on in a shile, but they settled down and played a good game. Both teams were held to a shut-out in the second half, but we dominated in statistics throughout the game.”

Although a loss is not something a team every wants to accept, some lessons can be learned from it, Hubbard said.

“Hopefully we grew from the game,” Hubbard said. “We learn something every time we play and we will continue to improve.”

With a tough first half, the Tigers stepped up their game and prevented the Bulldogs from putting any more points on the board. The Bulldogs kept their defense in check through the evening and didn’t allow any scoring from the Tigers.

Miller Hart started the game with a good keep to the Bulldogs who answered with a return to the 40-yard-line working their way toward the end zone. With back-to-back first downs, the Bulldogs forced the Tigers to make some aggressive plays. Narkavis Campbell and Jarekus Walker work down the field to bust up a UMS play preventing them from making it to the end zone on the play.

With just a little more than seven minutes in the first quarter, UMS makes their first score of the night. With a good extra point, the score was Bulldogs 7, Tigers 0.

With their first chance at the ball, Darius Webb gets the ball and makes a run to get to the first-down marker for the Tigers.

Quarterback Blake Jernigan hands the ball off to Webb on the next play to pick up a few yards. In what could be described as the “play of the night” Jernigan keeps the ball on the next snap and runs 60 yards down the field to put T.R. Miller’s first score on the board. Hart misses the mark on the kick putting the score at 7 to 6 in UMS’s favor.

Hart kicks the ball back to the Bulldogs who get it back out past mid-field for a first down. Webb takes down a Bulldog on the next play to push them back for a loss. A tough defensive line takes charge and puts the play down just past the line of scrimmage. Although the Bulldogs make another first down, pressure on the quarterback by Kyle Blevins and Landon Lindsey cause an incomplete pass. UMS would pick up another first down on the following plays putting them in striking distance of the goal line. The Tigers put on the pressure and UMS fumbles the ball, but quickly recovers. On a second-down play, the Bulldogs make a sweep to take the ball across the goal line for another score. With a good kick, the score is now Bulldogs 14, Tigers 6.

The Tigers work to regroup as they get the ball back for another round of downs. Webb gets the ball deep and takes it out to near the 40-yard line for a first down. Gandy then gets the ball from Jernigan and sets up the next play. Jernigan keeps the ball but is not able to make any progress on yardage. An incomplete pass from Jernigan to Webb would cost the Tigers a down putting them in a third-and-10 situation. Jernigan losses the ball in a sack on the next play with a quick recovery by the Bulldogs.

UMS takes command of the ball and picks up first downs as they move down the field threatening another touchdown. A strong Tiger defense keeps the play to only a three-yard gain, but a busted play by the Tigers would allow the Bulldogs to run it in for another touchdown score. With a good kick, the score is UMS 21, TRM 6.

On another tremendous Tiger play, Webb gets the ball from Jernigan and runs 80 yards straight to the goal line for another TRM touchdown. The two-point conversion fails and puts the score at UMS 21, TRM 12.

The Bulldogs would get a taste of a committed Tiger defense and get held back to only a two-yard gain. In the next plays, the Bulldogs would feel the pressure of Cameron Capterville and intentionally down the ball for a penalty. The next play would put them in a position to punt back to the Tigers.

At the half, UMS-Wright leads the Tigers, 21-12. That would be the final score for the game as both teams put their best foot forward on the defensive and offensive lines to work.

The third and fourth quarters would be filled with dramatic plays by a strong T.R. Miller defensive line and a determined offensive line.

D.J. Fountain would work the ball off the hands of Jernigan and Orlando Gandy stepped in many times to get the ball down the field as much as possible. Devin Smith and Logan Rowell would get their hands on the ball during the fourth quarter to fight for Tiger progress.

Jernigan took a chance to get the ball up to Smith and get inside the 10-yard line. Jernigan then gets the ball to Blevins who quickly throws back to Jernigan, but a UMS interception would keep the Tigers out of the end zone and the score.

As the Bulldogs struggled to get anywhere on the field, Wynn Brittain worked the defensive line by taking down a Bulldog and held them to only a one-yard gain. Gage Mims did his best to keep the Bulldogs from advancing down the field and Capterville stood up a runner for a two-yard Bulldog loss.

At the end of the game, UMS-Wright Head Coach Terry Curtis had praise for the Tigers and their ethics in the game.

“They are amazing guys,” Curtis said. “They’ve got six or seven guys playing both ways that never came off the field. That’s the reason they are in the top 10 for wins and the tradition.”