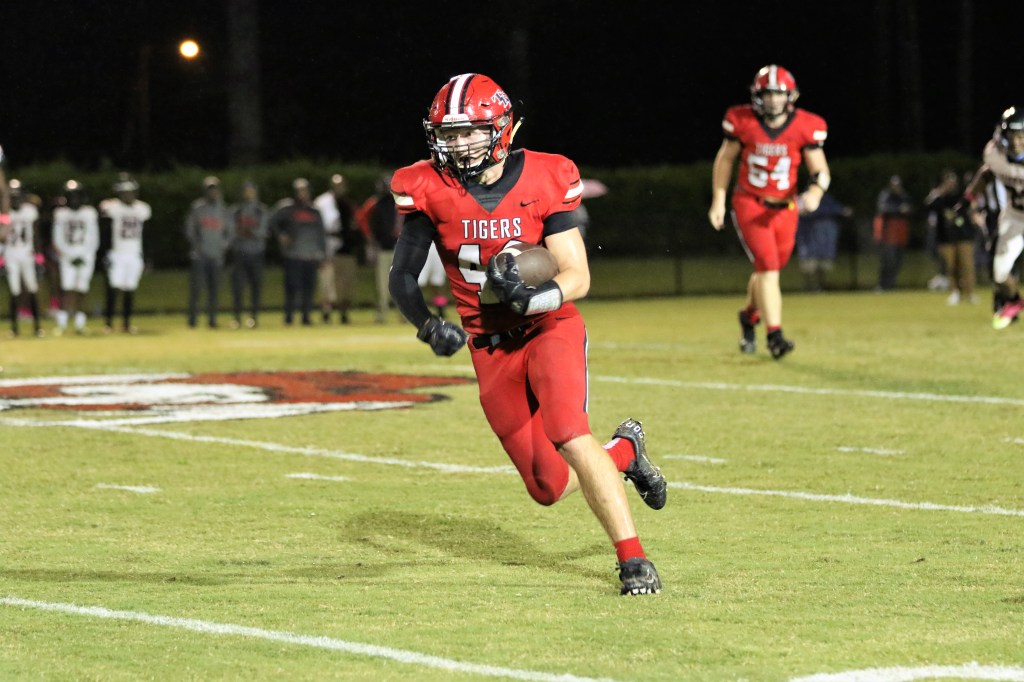 It was a soggy night for football across the region, but the Homecoming spirits were high as the T.R. Miller Tigers took on the Hillcrest Jaguars at Brewton Municipal Stadium Thursday night.

The game, originally planned for Friday, was moved to Thursday in hopes of missing some of the predicted rain associated with Hurricane Delta. The rain, however, made an appearance just as the pre-game festivities were set to begin.

As the senior Tiger players made their way to centerfield for the coin toss, Orlando Gandy stepped up and made the call. Winning the toss wouldn’t be the only win for the night as the Tigers ended the game with a solid win by a score of  37 to 20.

As the Tigers kick off to the Jaguars, they make quick work of stopping any advancement down the field for Hillcrest. With defensive players Bill Dolohite and Jashawn Williams making quick work of stopping the runner, Hillcrest works to move the ball. Gage Mims tackles the runner on the next play, but the Jaguars finally get the ball to a first down position. Williams busts up the next play and Kyle Blevins is in the right spot to bat down a pass by the Jaguars. In a fourth down position, the Hillcrest quarterback gets pressure from Noland Adkisson with help from D.J. Fountain and Cameron Capterville to break up the play to give the ball back to the Tigers on downs.

As the Tigers take control of the ball, Gandy and Webb get the ball on the first couple of plays to move the ball down to a first down spot. As quarterback Blake Jernigan fakes to Gandy, he fails to make a connection with a receiver. Fountain gets the ball and moves down the field followed by an eight-yard gain on a rum by Webb. Another Webb run would put the ball in the endzone for the first score of the night for the Tigers. Hart kicks the extra point to make it 7-0 for the Tigers.

Miller Hart kicks off to the Jaguars and the Tigers have good coverage on the play keeping Hillcrest from getting much traction on a return. A strong defensive line of Tigers kept the Jaguars from getting down the field with great plays and tackles by Williams, Gandy and Gage Mims. Logan Rowell was instrumental in taking down a Hillcrest receiver to force the Jaguars to punt the ball back to the Tigers.

The punt lands in the hands of Webb, but a wet ball gets dropped and quickly recovered. A Hillcrest penalty on the next play puts the ball in a good position for the Tigers. But work from Jernigan, Gandy and Williams isn’t enough to make much progress forcing a punt back to the Jaguars.

Webb punts the ball and puts it deep for Hillcrest who don’t have a chance at a return on the play. Failing to make a connection with a receiver Hillcrest can’t make any traction on the next few plays. An interception by Logan Rowell is quickly dismissed by a holding negates the play. It would take the Jaguars three plays to make it to a first-down position. A connection to a receiver on a third down play sees the Jaguars make their first trip across the goal line. The kick is no good due to a block by Cameron Coleman for the Tigers. T.R. Miller is still up 7 to 6.

A kick back to the Tigers is caught by Blevins who loses the ball with a fumble recovery by Hillcrest at the 26-yard line. But the next play sees the Jaguars fumble the ball and a quick recovery by the Tigers.

It would take the Tigers eight plays, picking up first downs along the way, to get the ball back into the endzone on a carry by Webb. A two-point conversion is successful putting the Tigers up 15-6.

Hart kicks back to Hillcrest who is met by a strong defense in Williams who takes down a runner. Another tackle by Landon Lindsey keeps the Jaguars from making much gain on the plays. Pressure and coverage from Capterville,
Dolohite and Gandy forces the Jaguars to give up the ball on downs as they fail to make any progress with the possession.

A quick fumble of the ball by the Tigers on the next play puts the Jaguars back in action late in the first half. Two passes are batted down by Adkisson and Williams in an effort to stop the ball. Hillcrest makes a connection on a pass to get the ball into the end zone. The point after attempt fails on a two-point conversion. As the buzzer sounds for the half, T.R. Miller is up 15 to 14 over Hillcrest.

As the second half starts, Miller gets the ball on a kick from the Jaguars. Gandy would take the ball on the second play and make quick work of finding the end zone. A faked kick turns into a successful two-point conversion putting the Tigers up 23 to 14.

A fumble and recovery by the Jaguars followed by a Tiger penalty puts the ball in good field position for Hillcrest. Hard defensive work from Adkisson and Jarekus Walker keeps the Jaguars from making any good progress putting Hillcrest in a fourth-down position and a forced punt back to the Tigers.

Webb gets the ball and moves down the field. With Gandy and Fountain jumping in on the next plays, the Tigers continue to move the ball. Gandy gets the ball down to the two-yard line thanks to a block by Fountain. Jernigan then keeps the ball on the next snap and takes it right over the line for another Tiger touchdown. Hart’s kick is good for the extra point taking the Tigers to a 31 to 14 lead.

As the Tigers regain control of the ball on downs, Fountain makes good work of moving down the field. But a slippery ball would get loose with a quick recovery by Hillcrest. Walker takes down the Jaguar runner and more work by the defense would force Hillcrest to give the ball back to the Tigers on a punt.

In the next possession, the Tigers would get great work from Gandy and Webb who get the ball down the field, but not enough to get the first-down call. A punt is forced giving the ball back to Hillcrest. But that possession wouldn’t give the team any traction with a punt being forced just three plays later.

A snap to Gandy gets the ball moving for the Tigers. Fountain also gets a handoff from Jernigan to pick up yards on the next couple of plays and finally getting to the first-down position. Blevins gets the ball and gets some help in a tackle by Webb to get to a first-and-ten spot again for the Tigers. Webb would get the ball and spin off from some would-be tacklers to make it down to the one-yard line. The next play found Webb trotting across the goal line for another Tiger touchdown. With a good extra-point kick, the Tigers go up 37 to 14.

Hillcrest would answer quickly with a touchdown of their own during their next possession. Even with pressure from Walker, Gandy and Adkisson, a Jaguar finds his way into the end zone. A two-point conversion failed for the Jaguars who tighten the score to 37 to 20 showing the Tigers ahead.

As the Jaguars take the ball, pressure on the quarterback by Chaz Pierre-Louis finds Hillcrest making no progress on the play. Williams jumps up to knock away a Hillcrest pass. On a third-down play, Hillcrest’s quarterback is met with a handful of tough Tiger defenders forcing a punt back to the Tigers.

As the buzzer sounds, the Tigers are up and end the game with a winning score of 37 to 14.

The Tigers will be off this week as they prepare to play the Flomaton Hurricanes in Flomaton on Oct. 23 in a conference game. Game time is 7 p.m.