WSN loses heartbreaker on the road 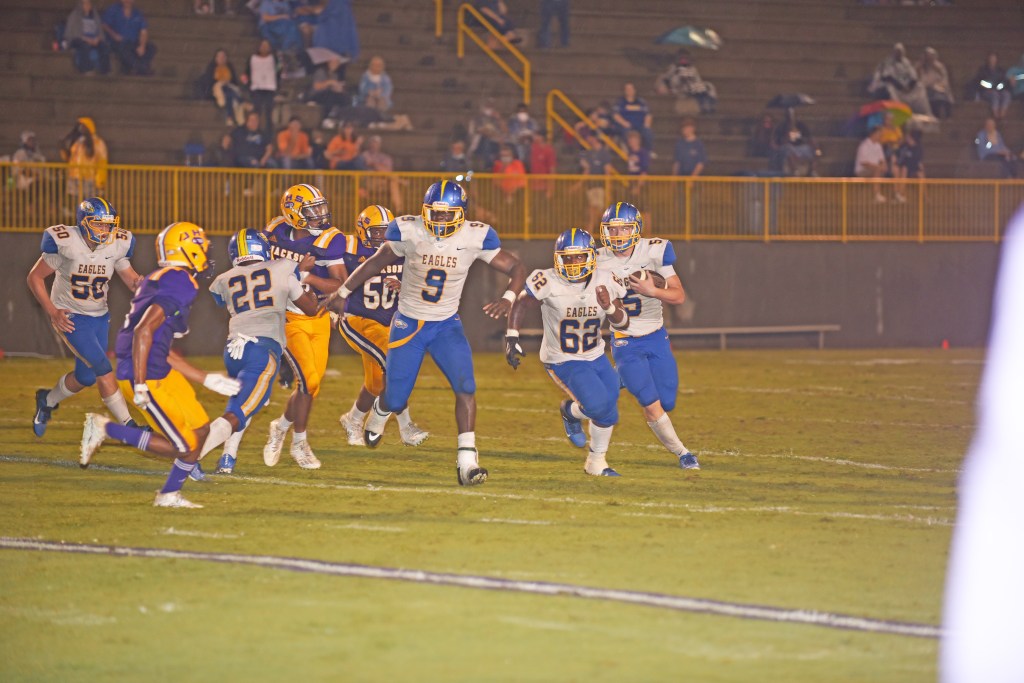 It was a wet night in Jackson as W.S. Neal’s Eagles traveled to take on the Aggies in region play.

In opening action for the Eagles, Isaac Bonam put a six-yard run and a touchdown for the Eagles just five minutes into the game. A good kick for an extra point by Samuel Bosarge was good putting the Eagles up quickly by a score of 7 to 0.

As the Aggies take possession of the ball, they can make no progress down the field in an effort to score. The Aggies would be held scoreless in the first quarter.

It wouldn’t be until late in the second quarter before the Aggies could make enough gains to put any points on the board. An eight-yard run by Ke’yontae Pritchett for the Aggies would put their first touchdown of the night on the books. A blocked point-after kick kept the score at Eagles 7, Aggies 6. That score would hold as the game buzzer signaled half time at the game.

Just five minutes into the third quarter, Pritchett would run the ball downfield 87 yards against the Eagles for a touchdown score. The attempt at a two-point conversion was unsuccessful putting the score at 12 to 7 in Jackson’s favor.

The Eagles would quickly answer with a score of their own in the third quarter. Alex Alvarez takes it in from the one-yard line for a touchdown. A two-point conversion run by Bonam is good putting the Eagles back on top by a score of 15 to 12.

It was a back and forth scoring run through the fourth quarter with the Aggies coming on strong early. An Eagle punt by Bosarge lands in the hands of Pritchett who makes and 86-yard return for an Aggie touchdown. Jeramie Houston kicks the point after putting the Aggies up over the Eagles 19-15.

The Eagles would need a few plays to get back into the action. Just over two minutes remaining in the game finds Dashawn Smith in possession of the ball and taking it over the goal line for a touchdown for the Eagles. Bosarge kicks a good extra point putting the Eagles back on top 22 to 19.

With less than two minutes left in the game, the Aggies get a chance at the ball with a pass from Walter Taylor to Tylen Campbell. The run would span 52 yards on the field for an Aggie touchdown. Houston makes another good extra point kick to put the Aggies up 26 to 22 over the Eagles to end scoring for the night.

W.S. Neal will be at home next week with a homecoming game against the Escambia County Blue Devils of Atmore.

Pre-game festivities will begin at 6:30 p.m. with presentation of the Homecoming Queen and her court. Kick-off for the region game will be at 7 p.m.