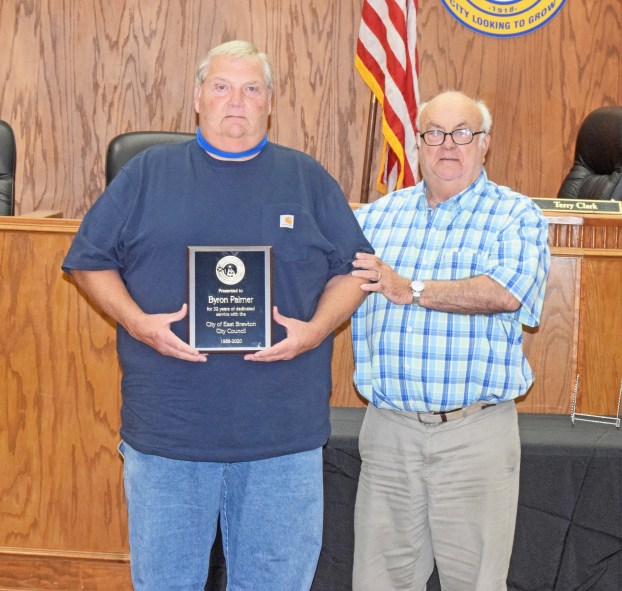 For many people, working at the same job for more than 30 years is only a dream. For one East Brewton councilman, that was a reality.

Byron Palmer made a decision this year not to run for his seat at the govern-ment table for East Brewton for another term. After serving for 32 years, Palmer was ready to retire.

“It’s been a pleasure,” Palmer said Monday at his final meeting of the council. “I’ve enjoyed working with everyone.”

Palmer was first elected to the Place 3 seat on the council in 1988. The August election that year resulted in a run-off for the seat in a race against Frank Beasley, the incumbent in the position. In the September run-off vote, Palmer was victorious over Beasley to win the position he would hold for more than three decades.

Palmer, and his wife, Lana, plan to make the most of retirement.

“I’m going to fish and relax,” Palmer said. “I’ll be retiring from my position with the county in January and I plan to take it easy.”

Palmer currently serves as the warehouse superintendent with Escambia County. He has held that position since October 1999. He will leave his post with the county at the end of January, he said.

Palmer is a 1974 graduate of W.S. Neal High School in East Brewton.

A reception in his honor was held immediately following the regular business meeting of the East Brewton City Council Monday.

Palmer’s seat at the council table will be filled by political newcomer John Stephens. Stephens was unopposed in the race for the seat in the August municipal elections.

In other business of the East Brewton City Council on Monday, the council:

• Approved a bid for the demolition of three mobile homes at 98 Park Street. The bid was awarded to Glen Hart Construction for $4,760;

• Heard from City Street and Sanitation
Supervisor Steve Dunaway about the placement of larvacide into the city’s holding ponds to cut down or eliminate the mosquito population in the area;

• Heard from Dunaway about the application of speed limit signs in the areas of Harold and Simmons Streets to help curtail speeders in the area with the ability to issue speeding citations;

• Heard from Mayor Terry Clark concerning bids for surveillance cameras to be installed on Williamson Street to help deter littering and have evidence of those who may be dumping illegally in the area;

All meetings of the mayor and council are open to the public with masks and social distancing guidelines in place.

YMCA to observe ‘days of action’