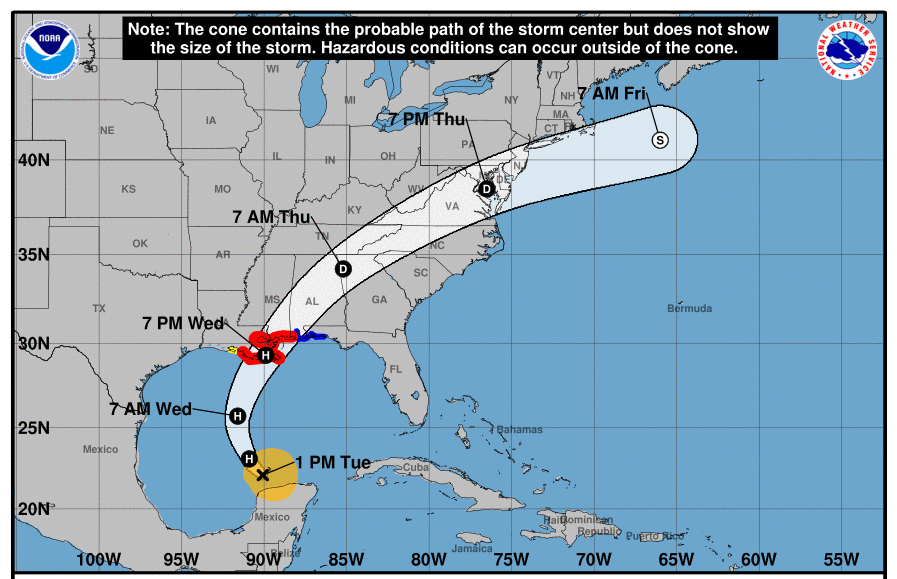 Hurricane Zeta is the eighth named storm in the Gulf of Mexico so far this season – and the season isn’t over yet.

With storm trackers making a forecast for Zeta, the cone of uncertainty once again has included Alabama. So far this season, Alabama has been included in the cone of potential storm impacts during six of the eight storms tracked.

Although the storm isn’t expected to be catastrophic, some damage may be expected with tropical storm force winds to impact parts of Alabama by late Wednesday (today) afternoon into the overnight hours, according to forecasters.

Winds expected in the Escambia County area could be between 30 and 40 miles per hour as the system tracks through the area.

Escambia County Emergency Management Director David Adams, said the storm will certainly be felt to some degree in the Brewton area.

“The current forecast has the highest probability of the center passing to our north and west,” Adams said. “Most of the impacts should happen through the night on Wednesday. Rainfall totals are forecast to be between 1.5- to 2-inch for most of the county.  Isolated tornados are possible.”

“A Tropical Storm Warning is in effect,” Megginson said. “There is a potential for scattered downed trees and power lines. Scattered power outages will be possible. Maximum sustained winds are expected to be in the 40 to 60 mile per hour range with higher wind gusts being possible. Total rain amounts of 1 to 3 inches are expected, meaning flash flooding is not as likely but still possible if storms train over the same areas. Tornadoes will be possible.”

Some forecasters say the storm will mostly likely be a fast-moving storm but will drop a measurable amount of rain in the 1 to 2-inch range for our area.

Zeta was expected to make landfall somewhere along the Louisiana coast late Wednesday afternoon or early evening and will move inland throughout the night. As the storm moves inland, weakening will occur downgrading Zeta from a hurricane to a tropical storm.