The fate of a portion of Brewton Heights Shopping Center on Douglas Avenue hangs in the balance as owners receive notice of serious health and safety violations in the west end of the center.

Steve Yuhasz, community development director with the City of Brewton, address the council last week to report on findings during an inspection of the property.

“We have had inspections from the state fire marshal and our local fire chief at the property,” Yuhusz told the council. “There are multiple violations including fire code violations, fire system malfunctions, lack of fire extinguishers, combustible materials and general clutter. These violations exacerbate the situation there. The roof is unstable and collapsed in areas and mold is an issue. Our fire chief said the mold there is the worst he’s seen in his career. Some 90 percent of the space is not fit for occupancy. The property has been shut down due to the unfit nature.”

Yuhasz the city provided written notice to the owner of the property, Namdar of Great Neck, New York, with a 45-day window to repair of demolish the property.

“We provided a written notice to appear for a hearing on this matter,” Yuhasz said. “This property is in a central part of the city. It is unfit for occupancy for any business. We have had several businesses who had been successful, but due to the state of disrepair were forced to leave.”

Richard Holiman, a representative for Namdar, was also at last week’s hearing to address the council on the situation of the property.

“I came to Brewton two weeks ago and saw that the building really needed some real help,” Holiman said. “I apologize. We will work to fix this and repair the building to get back up to code.”

Although the 45-day window would have expired in the next few weeks, Holiman asked for an extension of time to work on making the property inhabitable again.

“This property has been neglected because nobody’s been to see it,” Holiman said. “There is real value there. It will take some time to see what it’s going to take. We already have some bids with a bid of $250,000 to tear it down or $230,000 to repair the roof. I want to see what we can do to bring the property back to standard and get some good tenants in the space. I think there is great value there and I’m asking for an extension of 60-days. I want to talk with you to get some ideas of what you want to see.”

Yuhasz said the extended time to examine the property would be a good idea, if action is taken during that time.

“I’m aware that it will take time to turn it around,” Yuhasz said in response to Holiman’s request. “I sure want the city to see some tangible evidence.”

“That would be acceptable,’ Yuhasz said. “We can revisit it then and get a report on the progress and get a timeline for a suitable resolution.”

Brewton Heights Shopping Center was built in 1940 with additional wings of the location added in 1967. The west wing of the center has housed many businesses through the years. Some of the tenants have included Sears, ServPro, Family Dollar, Covenant Care Hospice, West Brothers, Brewton Dance Studio, Tom Thumb, and others. 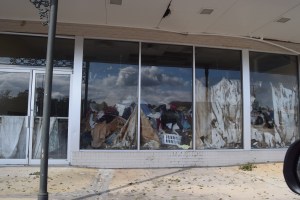