In one of the most anticipated games of the local high school football season, the Battle of Murder Creek was played at Brewton Municipal Stadium this past Friday.

The game, which has been a local tradition since 1946, saw the Tigers continue their winning streak with a final score of 39 to 0 over the W.S. Neal Eagles.

The game was attended by hundreds of fans as the teams went head-to-head in the annual match-up.

Even with COVID-19 concerns, fans were eager to find their place in the stadium for the game. Donning masks and working on social distancing as much as possible, fans were treated to perfect weather and big energy for the game.

The Tigers celebrated their victory following the win over the Eagles by accepting the annual Battle of Murder Creek trophy, presented each year by The Brewton Standard, courtesy of Jus Do.

Coach Brent Hubbard was also congratulated following the game with the presentation of a plaque commemorating his 200th career win.

Hubbard, who is in his second year as head coach at T.R. Miller, achieved a milestone by defeating 200 teams during his time as a football coach. Hubbard came to Brewton after leaving Maplesville and has worked to make the Tiger team a dynamic opponent against any team.

Hubbard has only had teams lose to 48 opponents in his career that began in 2001 at Maplesville. His percentage of win, as ranked by the Alabama High School Football Historical Society, is 80.6.

Hubbard continues a tradition that previous Head Coach Jamie Riggs made flourish during his tenure at T.R. Miller. Riggs, who left Brewton to coach at Houston Academy in Dothan, also created a glowing record as a high school football coach. During his time at Opp, T.R. Miller and Houston Academy, Riggs charted 316 wins against opponents until his retirement in 2019.

The Battle of Murder Creek records indicate that T.R. Miller has been victorious in the battle 52 times with this year’s win. The Eagles have taken the win 22 times in the history of the game. The last two years, the win was decided by only three points with T.R. Miller winning by a score of 7 to 6 in 2019 and a score of 14-12 in 2018.

The Battle of Murder Creek took the number four position in a nationa-wide contest to choose the best rivalry in the nation in 2018.

The tradition will continue in 2021 when the Tigers travel to East Brewton to take on the Eagles. 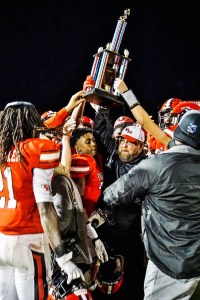