A Thursday evening “flight” of nearly 100 witches was seen along Belleville Avenue – and the witches were not the evil variety.

A last-minute decision to have a Witches Ride in Brewton began after a small group of friends saw a video floating around on Facebook, according to one of the organizers for the event, Meredith Buck.

“There was a viral video on Facebook that a few women here showed an interest in doing for Brewton,” Buck said. “I was so surprised by the turnout and the donations of non-participants.”

The donations, as well as the registration fee for riders, was already earmarked for someone special to the community – Peyton Boyette, a Brewton Middle School student who has recently been diagnosed with leukemia.

Buck said donations were still coming in as of Tuesday, but an initial estimate had donations racking up in the amount of $2,000 for the family of Peyton.

The ride began in the parking lot of T.R. Miller High School, and the witches, bikes and golf carts just kept arriving until the start time of 5:40 p.m.

“I couldn’t believe the spread of ages of those participating,” Buck said. “We had some children and older adults. Our oldest witches were in their 70s. There was an outpatient group from the hospital that came to participate and they brought other donations with them.”

Buck said the initial ideas for the event were small with hopes that it might grow in the future.

“I was hoping we could start something like this in Brewton,” Buck said. “But I thought it might take a little time to get people interested. We only started talking about this a week before the ride date. We really thought we would have 25 or 30 girls get together and ride down the sidewalk. It turned into so much more.”

A special Facebook page was set up for the Witches of Brewton and the participants and fans have been making plans for other events similar to last week’s ride.

“I hope the city supports us to do it again,” Buck said. “I do think this could become an annual thing. There are also plans to do other events similar to this ride.”

Buck said some members of the organizing group have suggested an Elf Ride during the Christmas season.

“We will have to regroup and talk about the things that went well and what we need to work on,” Buck said. “This was a three-mile ride and there are a lot that want to do this again.”

Buck said the charitable ride was a blessing for those participating as well as a source of help for the Boyette family.

“Right after the parade, even those who didn’t participate were asking how we can support Peyton and give a donation,” Buck said. “This has been a wonderful thing that has come out of the Witches Ride and that the spectators also want to help with donations.”

Based on the videos seen by other groups hosting similar events, a video dance has been a big part of the culmination of the activity.

“The riders said they want to do the video dance at the end of next year when we finish the ride,” Buck said. “They just can’t stop talking about this.”

The group left the TRM campus and turned on North Street to make their way to Belleville Avenue. The ride continued to the downtown area and disbanded at the Market Park at the mural.

Donations are still being accepted and can be sent to: 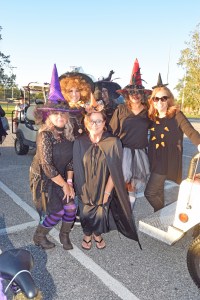