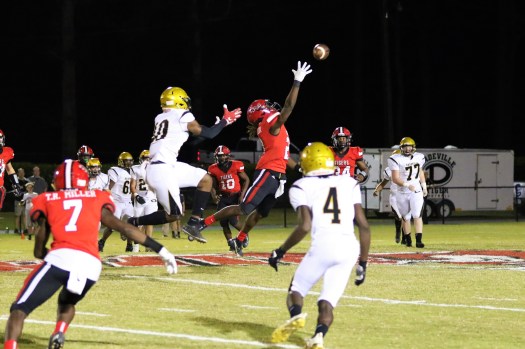 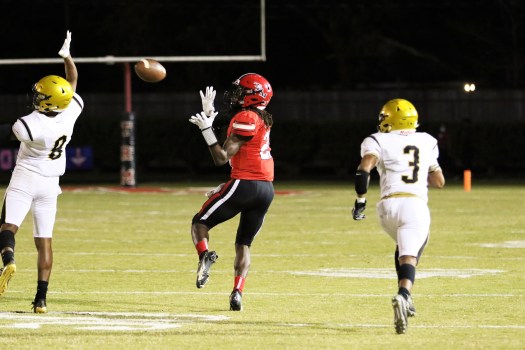 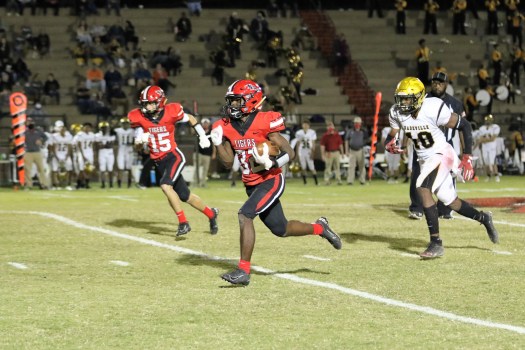 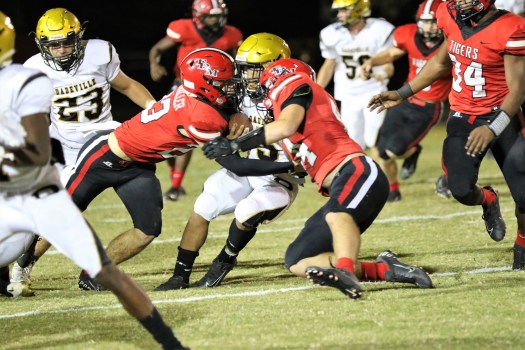 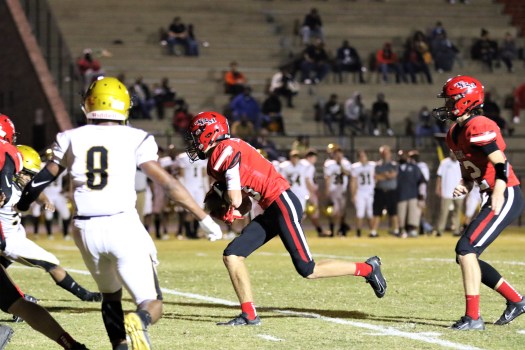 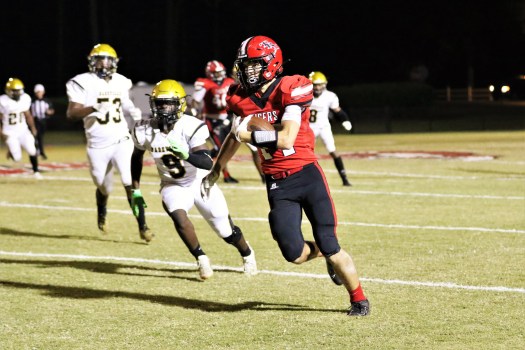 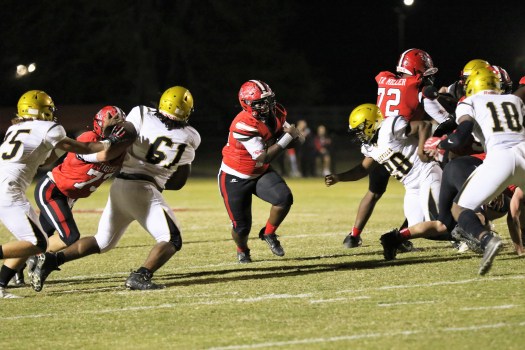 When the Tigers of T.R. Miller and the Tigers of Dadeville last met in 2016, it was the first round of play-offs and T.R. Miller lost the game crashing their hopes for a championship. When the teams met up last week for a re-match, TRM would vindicate themselves by a resounding win over the Dadeville team to clinch a spot in the second round of playoff action.

Coach Brett Hubbert said the team got to work early in the game to set up the win.

“It’s just survive and advance at this point in the season,” Hubbert said. “I’m glad to see the team come out and get the jump early in the game. They all executed well. We were also able to get some starters out in the game.”

The T.R. Miller Tigers would win the game handily by a score of 42-14 to set them up for another home game against the Thomasville Tigers this Friday night.

The game against Dadeville would begin with an early score for TRM with a Blake Jernigan pass to Darius Webb who forced his way to the end zone. A good point-after kick by Miller Hart put the Tigers up 7-0 in their first possession of the evening.

With a kick to Dadeville, the Tiger defense went to work quickly by keeping one player from advancing on the field and intercepting a pass on the first two consecutive plays of the possession. That interception was a set up for another TRM score when Jernigan gets the ball to Orlando Gandy who marched right into the end zone for another touchdown score. A Hart kick landed perfectly and put the Tigers up 14-0 in the first quarter of play.

In Dadeville’s second possession on the night, the team just couldn’t make any progress on the field against a tough TRM defense. With D.J. Fountain, Cameron Capterville and Gandy doing their part on the defensive line, Dadeville saw passes batted down and pressure on their quarterback to put them in a three-and-out spot forcing a punt back to the TRM Tigers.

To start the possession, Hart gets the ball and picks up seven yards on the play. In the next two plays, Fountain and Hart would get chances to get the ball down to mid-field for TRM. Jashaun Williams takes the ball and gets to a first down spot on the field, giving the Tigers a handle on a new run for the goal line. In a third-and-three situation, the Tigers work to get a first down with success on a Gandy play. Jernigan then gets the ball back to Hart and gets further down the field. Gandy would get the ball next and shake off a tackler and drag another down the field to pick up another first down. In the next plays, the Tigers continue to gain yards with plays from Fountain, Jernigan and Webb to threaten at the five-yard line. Logan Rowell would get his hands on the ball and strut into the end zone for another TRM touchdown. PAT is good on a Kick from Hart putting the Tigers up 21-0.

Dadeville prepares to receive the kick from T.R. Miller but a fumble gives the ball right back to the Tigers. That mistake by Dadeville would be rectified three plays later when a Dadeville player intercepts a Jernigan pass intended for Webb.

And the end of the first quarter of play, T.R. Miller stays on top of Dadeville by a score of 21 to 0.

A tough TRM defense works to keep Dadeville from a chance at a score throughout the second quarter. Jarekus Walker and Landon Lindsey work the field to the advantage of their team and help get Dadeville in a fourth-down spot quickly, forcing a punt back to the host team.

Taking the ball at the 25-yard line, Gandy works to pick up nine yards on his first chance at the ball. Gandy would get it again and spin out of the hands of a would-be Dadeville tackler to get the ball to the 45. Hart takes the ball but can’t get going before being taken down with just a short gain. It would take plays from Fountain and Webb to pick up a first down on a pair of plays for the Tigers. That would be the push needed for Jernigan to get the ball to Landon Lindsey who would take it to the goal line for another TRM touchdown. With a perfect evening on kicking, Hart gets the ball through the uprights to put the Tigers up 28-0.

A Dadeville possession would see them back in a three-and-out situation with the TRM Tigers working defense perfectly.

As the Tigers get the punt, Webb whips through a line of Dadeville defenders to get the ball down the field, but a holding call would take 10 of those gained yards away, putting TRM in a first-and-15 spot. Jernigan would get the ball to Webb on the next play, but kept the ball on the following play to make a strong run for the end zone to put the Tigers in a second-and-four spot. Jernigan kept the ball again and makes great strides, but is pulled down at the one-yard line. Brody Hubbert would take the ball on the next play and get the ball across the goal line for an impressive TRM touchdown. With another Hart kick, the Tigers go up over Dadeville 35-0.

Even as Dadeville struggled to move the ball down the field in hopes of their own touchdown, they see hope fade when a pass is intercepted by Kyle Blevins for the TRM team. That play would bring the first half of play to an end with the T.R. Miller Tigers leading 35-0.

As the second half begins, the TRM team kicks to Dadeville, but a young line up of TRM defenders would keep them from making any progress down the field. Ezra Carpenter works his position to stop a Dadeville play. On the next play, Dadeville gets the ball and finds an opening to make their way to the end zone. The point-after was good putting the first score on the board for Dadeville. TRM still leading, 35 to 7.

On the next TRM possession, Brittan McBride finds his way down the field to rack up some yards for the Tigers. Christian Autry gets the ball and finds his way to the 39-yard line. Jim Daughtery works his position at quarterback and gets the ball to Bracken Pettis who gets knocked out of bounds at mid-field. An Autry carry gets the TRM ball in a first-down position with Daughtery keeping the ball on the next play, only to see the play busted up by Dadeville. That play put TRM in a fourth-down situation forcing a punt back to Dadeville.

With Dadeville hoping to put on a few more points, their plans get thrashed by Landon Barrentine and Logan Rowell who would take down runners on the following plays. Dadeville met a strong TRM defense and would be put into fourth-and-15 spot forcing a punt back to the Tigers.

An the punt return, the Tigers don’t get pick up much yards on the play, but make steady moves in their possession. Daughtery takes the snap and hands it off to Autry who makes a big gain for the Tigers and puts them in striking distance of another touchdown. On a first-and-goal play, Daughtery gets the ball to Autry again and gets to within a half-a-foot of the goal line. Autry gets the ball gain and strolls into the end zone for a TRM touchdown with help from John Wesley Sessions blocking on the play. Hart gets a good kick putting the Tigers up 42 to 7.

A kick back to Dadeville put some juice in their efforts and the team quickly worked their way down the field. After a handful of plays, the Dadeville team finds the goal line and puts more points on the board. A good point-after kick makes the score 42 to 14 with the TRM Tigers leading.

That would be the end of scoring for the night putting the T.R. Miller tigers squarely in the second round of play off action.

With Thomasville winning their game against Wicksburg, the match up on Friday, November 13 will see T.R. Miller hosting the second game of the playoff run for the championship.

Hubbert said this week’s play off game will be one the team has some experience with having met the Thomasville Tigers in the past.

“This is going to be anther T.R. Miller versus Thomasville game,” Hubbert said. “This early in the playoffs, it’s going to be a good game.”

This week’s game will be played at Brewton Municipal Stadium in Brewton with a 7 p.m. kick-off time. Tickets will only be available through the Alabama High School Athletic Association’s website. Tickets are $8 each with no tickets sold on campus or at the gate for the game. To purchase tickets, visit https://gofan.co/app/events/135271…