TRM toppled in second round of play-offs 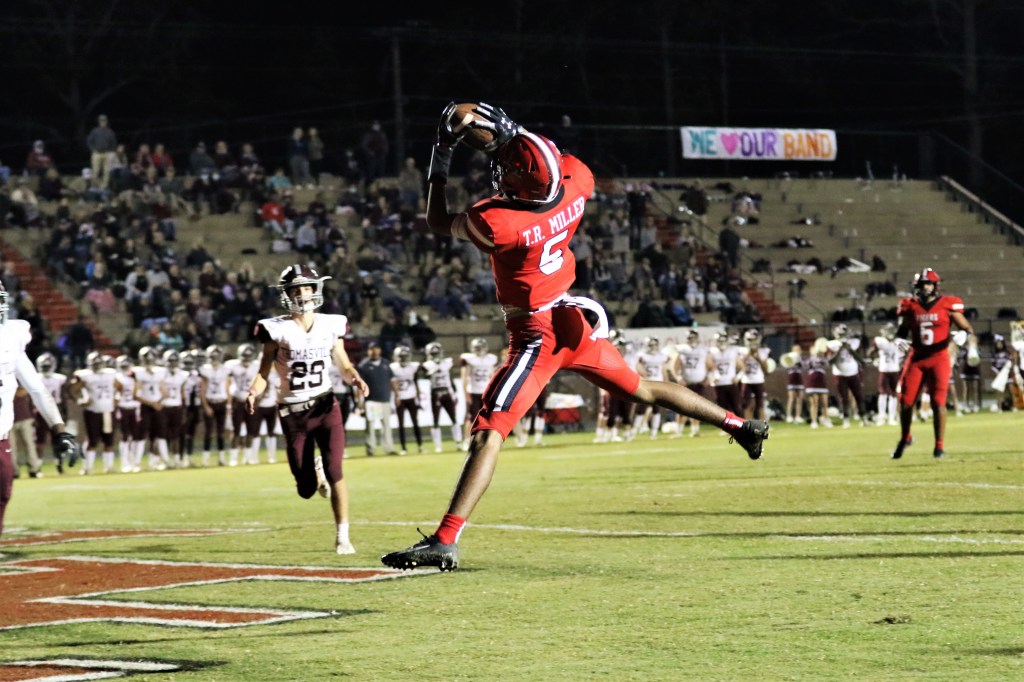 T.R. Miller’s Tigers would work hard in the second round of playoffs Friday against the visiting Thomasville Tigers. That hard work made for a good game, but would not be enough to pull off a win. The final score found Thomasville on top with a heartbreaking 28-21 win over T.R. Miller.

TRM Head Coach Brent Hubbert said he was pleased with the work shown on the field by the team for this season.

“They showed good resilience,” Hubbert said. “They never quit and played right up to the whistle. We did some things on the field to hurt ourselves that we just couldn’t overcome. These guys played hard and had a good season.”

T.R. Miller won the toss and deferred their possession to begin the second half. Thomasville received the first ball of the night but couldn’t make enough progress against the Tiger defense to get any points on the board. With a three-and-out in the possession, T.R. Miller took the ball on a punt with a fair catch by Darius Webb putting the Tigers in the running for the first time on the night.

In their first possession with Blake Jernigan at quarterback, the ball gets to Webb and Orlando Gandy, Jr., on a pair of plays to move the ball down the field. The stiff defense of Thomasville prevented much gain on the plays leaving TRM just short of the first down. A bad snap and some miscommunication forced the Tigers to turn the ball back over to Thomasville.

Thomasville would have trouble moving the ball to get close enough for a touchdown. Getting only close enough for a field goal attempt, Thomasville gets their kick knocked down by Zody McMillan to prevent the score. That batted down ball is picked up by Gage Mims who gets the ball back to the 20-yard line for the Tigers.

Jernigan would keep the ball and pick up some yards on the next play and Narkavis Campbell made progress on the following play. D.J. Fountain would get the ball and get the first-down for the Tigers. Gandy gets the hand-off from Jernigan to pick up some yards, but a missed connection on a pass to Nolan Atkinson to put the Tigers in a tough spot. Work by Webb would get the ball downfield on a handful of plays to find the end zone and the first score of the night for the Tigers late in the first quarter.

T.R. Miller would work hard on the field to move the ball putting it in the hands of Gandy and Campbell on a handful of plays. An intended pass to Devin Smith fails and puts the Tigers in a fourth-down position forcing a punt back to Thomasville.

It would take Thomasville 12 plays to move the ball down field close enough to threaten a score. One more play and they are in the end zone with a good kick putting them in a tie against T.R. Miller just before the half.

As the Tigers work to make some points before the half-time buzzer sounds, quick work made it happen. Jernigan gets the ball to Webb and Williams on a couple of plays to give the Tigers a first down and hopes of scoring. A few missed connections on passes by Jernigan to Webb were answered when Jernigan connected with Gage Mims who gets the ball down to the 10-yard line. On a scramble for a touchdown, Jernigan gets the snap and fakes a hand off to Webb opting for a pass to Trent cooper who makes the catch and a touchdown for the Tigers. A good kick by Miller Hart changed the score at the half with TRM 14 and Thomasville 7.

By deferring at the coin toss, the Tigers get the ball to start the second half leading. Jernigan would start by getting the ball to Gandy on a couple of plays, but he can’t hold onto the ball with a recovered fumble by Thomasville in good field position.

Thomasville takes advantage of the fit and gets the ball across the goal line for a touchdown. A good point-after kick puts the game back in a tie with 14-all.

As Jernigan gets a chance at the ball again for TRM, Campbell and Mims both get their hands on the ball but they can’t pick up enough yards to get a first-down forcing a punt back to Thomasville on fourth down.

As the Tigers receive the kick they are hunting to answer the score against them. Blevins works the field and gets good yardage on his play. Jernigan would get the ball to Williams on a pair of plays to pick up some yards and a fake to Webb on the next play would see Campbell get the ball and a first-down for the Tigers. Jernigan gets a pass off to Webb but can’t make a connection. A missed pass to Cooper and a connection to Atkinson isn’t enough to keep the ball on a fourth-down situation. The Tigers are forced punt back to Thomasville.

As Thomasville works to widen the lead, they have some trouble late in the third quarter.  Picking up on a couple of first downs in their possession, would find the game running over into the fourth-quarter. Work against Thomasville from Jarekus Walker, Landon Lindsey and Williams would force Thomasville to work extra hard for their chance at more points. It would take a handful of plays before Thomasville finds the goal line again and another score. The point after kick is good and puts Thomasville two touchdowns ahead of the Tigers, 28-14.

It wouldn’t take long for TRM to answer the score. Cooper gets the ball and picks up a first down for the Tigers, but TRM has to work hard against the Thomasville defense. That work paid off when Jernigan gets a pass to Cooper to pick up another first down in Thomasville territory. Fountain would get the ball and get within striking distance for the Tigers. A Jernigan pass to Webb would make it into the end zone for another TRM score. A good kick by Hart puts the Tigers back into the game. Thomasville still leads, 28-21.

A kick back to Thomasville gave the tough Tiger defense a chance to shut them down on the plays. The determined Tigers would keep Thomasville from scoring in what would be their last possession of the night.

The T.R. Miller Tigers finished their season with a 9-3 record overall and a perfect 6-0 record in region play.