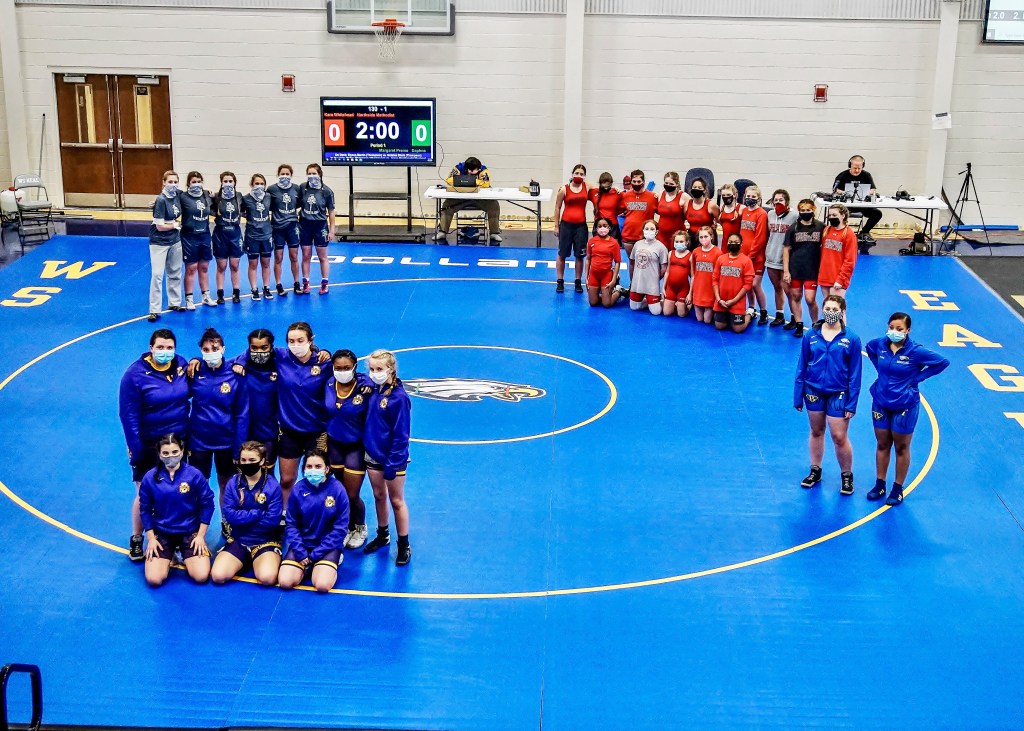 History was made in East Brewton last Friday as the first all women’s wrestling event was held at W.S. Neal High School in the Murder Creek Melee tournament.

Under the direction of Coast J.T. Gosnell at W.S. Neal High School, the tournament featured four school teams as part of the history-making event.

“I’ve been working with the girls wrestling task force and had this event scheduled in Mobile,” Gosnell said. “But the event was cancelled due to several circumstances. After speaking with the three other schools with the largest group of wrestlers, we were able to get the event rescheduled to take place at W.S. Neal.”

Gosnell said school teams from Birmingham, Daphne and Dothan participated in the event with the team from W.S. Neal.

“This tournament was fun to watch,” Gosnell said. “Most of the wrestlers had not had an opportunity to wrestle against other teams. It was a smooth tournament and we were excited to be able to host this event.”

Gosnell said the W.S. Neal women’s team consists of nine wrestlers, however, only two of the team members were able to participate.

“Due to some sickness, we only had two girls ready to wrestle,” Gosnell said. “They did a good job and had some good matches.”

At the end of the tournament, team scores put Thompson in first place with 92; Daphne in second with 80; Northside Methodist in third with 47; and W.S. Neal with 18 to end in fourth place.

On Saturday, the boys teams had an opportunity to meet up at W.S. Neal High School for the second part of the Murder Creek Melee Tournament events.

“We had 11 teams ready to participate in this tournament,” Gosnell said. “Due to some guidelines we had to follow, only four teams were allowed in the gym. That rule had us hosting matches in both gyms at W.S. Neal High School and in the gym at W.S. Neal Middle School. But, overall, the tournament was a great event and everything went smoothly.”

In junior varsity action, Aidan McCall of W.S. Neal finished the tourney in fourth place in the 106 division. McCall defeated Jonah McKinnon of Thompson High School to help push him to the final position.

In the 152 division, Solomon Crapp finished in second place while Daniel Zylstra finished in fourth place. Crapp defeated Zylstra in the first round of play for the division. Crapp also defeated a wrestler from Northside Methodist for a win in the fourth round of action.

In the 170 division, Justin Lambeth finished in the top spot while Xavier Boggs finished third and Noah Smith finished in fourth place. Boggs defeated Smith in the first round with Lambeth defeating a Daphne wrestler in the second round of play. Smith defeated a Northside Methodist wrestler in the second round as well. In the third round of matches for the division, Lambeth defeated a Northside Methodist team member and went on to defeat Boggs in the fourth round of action.

Blake Chance finished the tournament in second place having defeated a Daphne wrestler in the first round and a Northside Methodist wrestler in the third round of action for the division.

In the 285 division, Drayton Gideons finished the tournament in sixth place for W.S. Neal’s team.

Team scores for junior varsity action saw Thompson High School in first place with 167.5; Daphne in second with 108; W.S. Neal in third with 91; and Northside Methodist Academy with 43.

In varsity action, Aidan McCall finished the tournament in fourth place in the 113 division of action. McCall defeated two wrestlers, both from Houston Academy, in the second and third rounds of action.

In the 126 division of varsity matches, John Andrews finished the tournament in third place while Jason Yoder finished in fourth place. Andrews defeated Yoder in a round one match.

In the 145 division, Logan Sapp and Donovan Hall finished in third and fourth places respectively. Sapp defeated Hall in round one action of the tournament.

In round three, Zylstra defeated Morton and Currier defeated a St. James wrestler. Crapp was taken down by Pittman in the same round of action, but defeated Zylstra in the fourth round of matches.

In the final round of action in the division, Currier defeated Zilstra while Crapp defeated Morton. Pittman lost in the round to a St. James wrestler.

In the 195 division, Blake Chance brought home the second place title with a win over at St. James wrestler in the second round of action for the division.

In the 285 division, Drayton Gideons finished the tournament in third place defeating a St. James wrestler in the third round of matches for the tournament.

Team scores from the varsity division of action put St. James on top with 140; W.S. Neal in second place with 90; and Houston Academy in third with 45.

The historic girls wrestling matches held last week at W.S. Neal were part of an effort from members of the Alabama High School Girls Wrestling Task Force. The group formed in 2020 with a focus on promoting the sport of girls wrestling in the state of Alabama.