No ifs, ands or Butts: Building had rich history 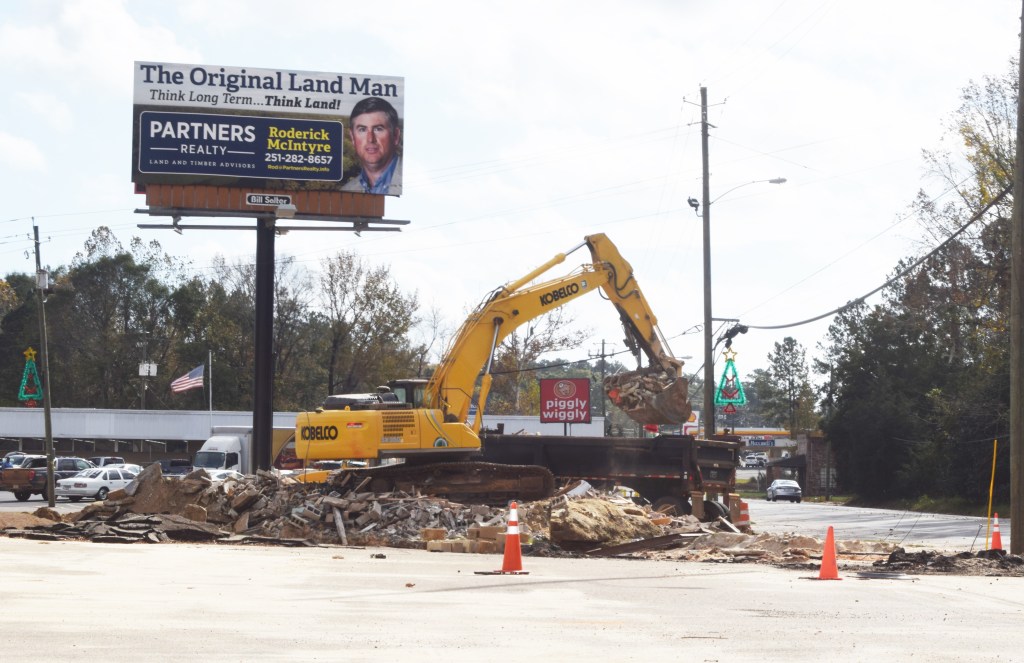 For those who travel along Forrest Avenue in East Brewton, one landmark has left the landscape. Butts TV is now a very descent thing of the past.

Last week, demolition of the building located at 117 Forrest Avenue was demolished leaving behind fresh soil. The building was located next door to the East Brewton Civic Center just across from Piggly Wiggly.

Although the building was home to several other businesses through the years, Butts TV is the most well-remembered business to have operated in the location.

Debra Butts Hawthorn remembers her time growing up around the business that began with her grandfather and later run by her father.

“I have such sweet memories of being there with the family,” Hawthorn said.  “I kind of grew up in that store and learned a lot from my daddy about treating people fairly and honestly. A lot of people have said really nice things about my daddy. He had so much pride in himself and in his business.”

The business of repairing radios, and later, televisions began in 1941 when E.J. Butts began making repairs in the community. Wayne Butts, son of the owner, bought out his dad in 1954 and began offering television repair while E.J. continued to repair radios on a part-time basis in the business.

“He started out repairing radios then, which is what most people had,” Hawthorn said. “As things progressed, televisions became a big business for repairs, too. As technology changed through the years, the business changed with it moving from repairs to sales and even rentals.”

Hawthorn said the business that began only in the repair end of technology for radios and televisions, other advances called for some creative strategy.

“When satellites came along, they did that too,” Hawthorn said. “Then people started having VCRs and wanted to rent videos. They did that as well. Back in the 1960s and 1970s, people even had the option to buy records at the store. As things changed, the business changed with the times.”

Through the years of doing business in the location adjacent to Murder Creek, floods became a common occurrence. Beginning with the flood of 1973, the business was forced to pack up as much as possible and start over more than a half-dozen times over the years. The flooding had taken its toll and dealt a final blow on the building and most recently experienced flooding in September of this year.

In 2002, a special history of the business was examined in The Brewton Standard’s annual Progress edition. In the article, owners Wayne and Faye Butts reminisced about the business and the events that transpired while there.

“There have been times I would have welcomed the opportunity to move,” Wayne Butts said in 2002. “But, we never have been able to get the proper government assistance to make that possible. Unlike homeowners who are able to get grants to assist in relocating, there is no such assistance available to businesses in flood zones.”

Butts said at the time, that the flood in 2001 greatly altered their ability to continue business in some aspects of their offerings. With the flood, the business lost its entire video rental inventory and they chose not to replace that portion of their business.

Hawthorn said the recent demolishing has stirred memories for her as well as friends of the family and of the business.

Doug Agerton remembered his visits to the business and “Mama Butts” through the years.

“I have to admit it was sad to see the Butts TV building being torn down, Agerton said. “I understand why but that building was a special place for me to visit from time to time, actually everyday during turkey season when Wayne Butts and Mama Butts had the Movie Gallery and TV repair shop. I always called Ms. Faye ‘Mama Butts’ because she treated me like I was one of her own children.”

Agerton said his visits to the business weren’t actually business, but more of a chance to get some hunting advice and visit with a friend.

“I loved going by to talk to Wayne about hunting,” Agerton said. “We would be in there where we could see cars passing and Wayne would see a fellow called Sarge pass by and he would say ‘Well, there goes good ole Sarge, he ain’t going to stop by, he must know where a turkey is gobbling and he don’t want us to know.’ It’s not about the building, it’s the people and the memories that make places special. I am sure everyone has childhood places that were special to them that are not here now. Ed Leigh McMillan told me one time, ‘The only thing that stays the same is change.’ Wayne was a dear friend of mine and I really miss him during the spring of the year.
No matter what time of year it was, Hawthorn said Butts likely had a record of most everything that took place in the shop.

‘My daddy was so organized about everything,” Hawthorn said. “He had a notebook for everything. He had everything documented so well in the notebook that he had the times of heavy rains and how fast the water would rise each time. He was so precise in his records that he knew even before predictions of a flood were made. He would tell people it was going to flood and it did.”

Hawthorn said being at the business so much she was able to see just how much people appreciated her family and the services they offered.

“There were times when I would be up front with my mother and here laughter coming from the back,” Hawthorn said. “There were friends of my family that would drive up and come in the side door just to talk with my daddy. You could hear the laughter and the talking from there. That’s a wonderful memory for me now.”

No details have been uncovered on any future plans for the property.